What, you may wonder is the relationship between Trastevere, Pope John Paul II and this blog. Serendipitous, that's what! On the day that John Paul II was beatified (a step away from sainthood), my sister, my husband and I braved the crowds to get to the vicinity of the Vatican. We were told that we didn't need a pass or ticket to get in. Naive people that we were, we believed it! Were we ever wrong! We could not even get anywhere near the Vatican. So we ended up walking southward until we got to Ponte Sisto, an ancient footbridge reconstructed by Pope Sixtus IV, hence it's name, leading to Trastevere. 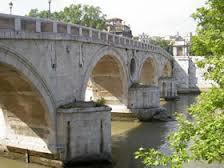 And that's how we got to Trastevere, which became one of my favorite places in Rome! An eclectic enclave, it is charming, picturesque, historical.  It is also hip, trendy and, oh yes, seedy in some areas. It is the 13th Rioni (town or district) of Rome and considered one of its most beautiful neighborhoods.

When we entered Trastevere through the Ponte Sisto that first time, the streets were empty and eerily quiet. We were to find out later that this was indeed a rare sight. 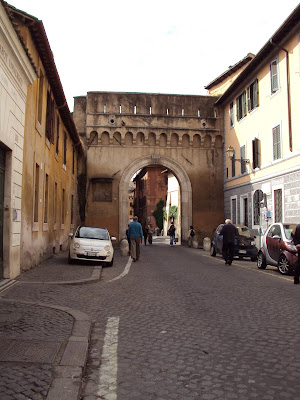 In ancient times, Trastevere which means beyond the Tiber, was a "poor" area, home to sailors and fishermen who made their living on the Tiber. There was also a large Jewish community. But during the Imperial age, Rome's elite started to build villas in Trastevere. Julius Caesar, Livia, wife of Octavian, Julius Caesar's heir and Marcus Vispanius Agrippa had villas built in Trastevere. Today, the sites of those ancient villas are being unearthed.

However, even with the movement of the elite to Trastevere, it remained an area of narrow and winding streets. Sixtus IV paved the streets with bricks, which were later changed to cobblestones to accomodate carriages.

To this day, the streets of Trastevere, are narrow and winding, but lined by charming houses, apartments, shops, restaurants, bars and coffee houses. 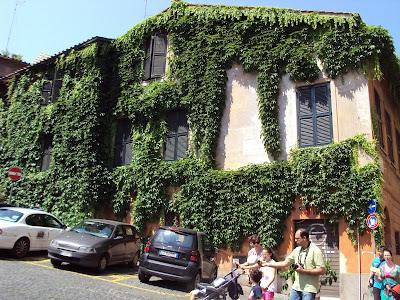 On the day of John Paul II's beatification, the streets of Trastevere were as empty as most of Rome's streets, the people having converged on the Vatican by the thousands! We ended up in a charming coffee shop, Caffe della Scala, the only coffee house that was open at the time. 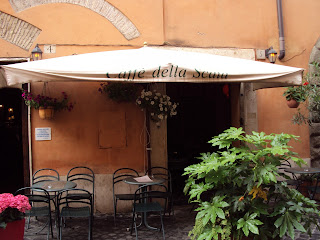 It was pleasant in that little cafe, we occupied one table and there was only one other table occupied by a couple. We ended up watching the proceedings in the Vatican on the cafe's television, while enjoying cornettos and cups of espresso. 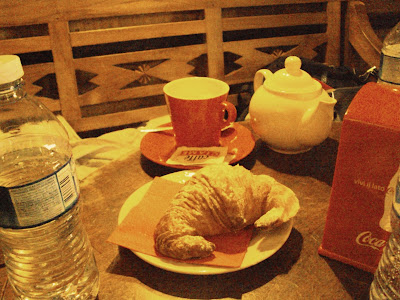 After breakfast, we decided to walk to the nearest chruch to hear mass. We ended up in the Church of Santa Maria in Trastevere. 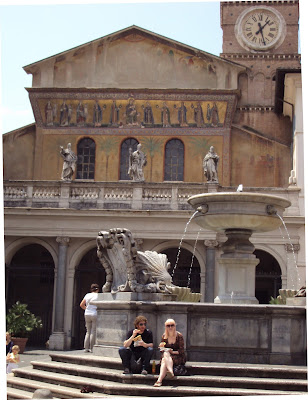 There is a piazza in front of this church which we would return to many more times. 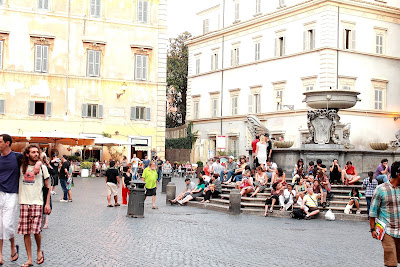 This piazza is one of the most popular gathering sites in Trastevere. It's fountain is believed to be the oldest in Rome, dating back to the 8th century. The fountain as it is today is believed to have been the work of Donato Bramante with some later work done by Gian Lorenzo Bernini.
On this piazza also one will find several restaurants where one can dine alfresco, roman style. Fellini, a famous Italian film maker, filmed segments of his film Roma here in this Piazza. One of the restaurants, Sabatini was featured in this movie. My mother, remembering this film, asked me to find out if Sabatini still existed. It is still there. So, with it's ancient sites, and glorious ruins, one also comes across establishments like Sabatini! No wonder some people call Rome "the eternal city".

﻿
﻿
﻿
﻿
﻿
﻿
﻿
﻿
﻿
﻿
My husband and I decided to eat there once for lunch.
The restaurant is picturesque, the paper placemats bear Trastevere's coat of arms, the food... well it was ok if a bit overpriced. 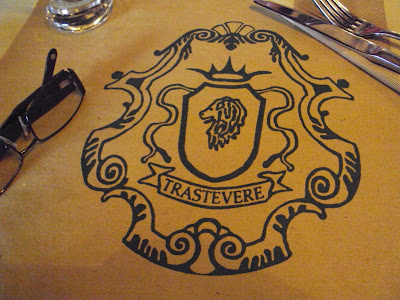 The other times we visited, we simply strolled down the cobbled stone and chose a restaurant at random.
On the day of John Paul II's beatification, the piazza was quiet, clean and almost empty. But on our subsequent visits, we saw it's true character. There were crowds of people of different nationalities, ethnic backgrounds, ages,  orientations and states of inebriation.
We were told this piazza is a known gathering place for drunks.
We were to discover more of the paradox that is Trastevere on our later visits.﻿
Posted by a dependent spouse at 8:19 PM