I have been to the Roman Forum three times now but have had difficulty starting a blog about it. It became a difficult task I think because stepping into the Forum leaves one with so much to think about, but on the other hand there is disappointingly very little to see. It is difficult to reconstruct what was once there and more difficult to disregard the “mutilation” that is there. One cannot help but lament the result of years of “plunder” by popes and rulers that have left this place resembling the  emperor of the childrens' classic story, parading without a stitch of clothing, or...ok...just in his underwear!

﻿
﻿
﻿﻿﻿
﻿﻿Having said that, stepping into the Forum aroused echoes of school, memories of oratorical moments, and recapturing history and literature lectures of exceptional quality, rekindling for me once again interest and awe in all things Roman. There is something about  it (the Forum) that captures the imagination, standing on the spot where Romulus lived, walking down the same path that Cicero, Brutus, Marc Anthony et. al. trod on, and standing on the spot where Julius Caesar’s remains were entrusted to the heavens.   And so I stayed and came back again and again, going through the ruins and trying to see in my mind’s eye the way it was before.

The Forum is a rectangular plaza which began its existence as a marketplace. For centuries it was the center of Roman public life, the site of elections, triumphal parades, gladiatorial matches (before the coliseum was built), public trials, venue for speeches and rallies, in short “the teeming heart of ancient Rome”. 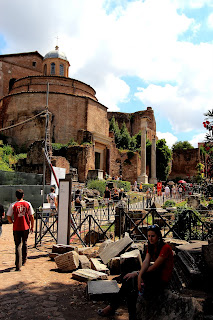 One enters the forum through the Via Sacra. Walking north toward the Capitoline Hill, one comes upon the Temple of Romulus on the right. It is a round temple still possessing its bronze doors, built by Maxentius, an opponent of Constantine in memory of his son Romulus. Behind this, Emperor Nerva built his Forum Pacis which was transformed in the middle ages, to the church of Saints Cosme and Damiano, thus saving it from destruction and "looting". 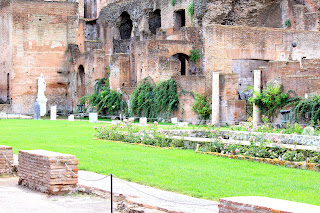 In front of this temple was the site of the home of the Vestal Virgins, whose duty it was to tend the holy fire in the Temple of Vesta. Vesta was the goddess of the hearth fire, the center of the roman house and worshipped in the family circle. The temple guarded the “holy fire”, the symbol of the life of the city, and as such could not be allowed to die down. Every year, during spring cleaning time, embers from the old fire would be kept in order to re-kindle the fire anew. 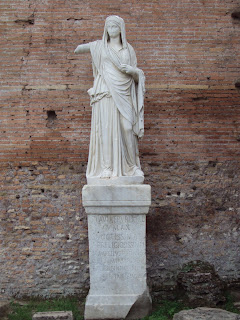 This fire was tended by 6 Vestal Virgins. The Vestals were very important women, in that performance of their one and only task was tied to the continuity of the Roman state. This duty was considered of the utmost importance and so young girls from the most notable families were chosen from a very young age to become vestals. They were brought into service at the age of 6 to 10 years of age, underwent a 10 year training period and served for 30 years. They took a vow of chastity which had to be adhered to until the term of service ended. Some of them never left the temple, choosing to live out their lives as vestals, some left the temple and even married and had children. However, if a vestal broke this vow of chastity while still a vestal, the punishment was “entombment”, being buried alive. 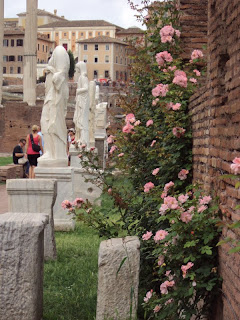 ﻿All that remains of the House of the Vestals is  the rectangular courtyard with a tiny pool in the middle and statues of past Vestale Maximates (head vestals) around it. To the sides are remains of the rooms which these women stayed in. Apparently some of them are very well preserved unfortunately, they are not opened to the public. This area has a nice, tranquil feel about it, grass covered the courtyard around the square pool and creepers and flowers dotted the walls and the garden. 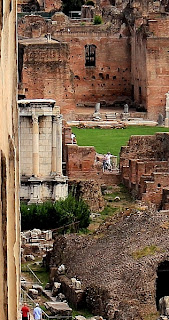 In front of the House of the Vestals is the Temple of Vesta, a white circular structure.
Just in front of the House of the Vestal Virgins to the right lie the remains of the Regia. This is one of the oldest structures in the Forum, said to be built by Numa one of the first kings. This was the residence of the kings and then became the lodging place of the Pontifex Maximus, the highest priest in the board of Pontifices tasked among other important duties, with making the calendar, namely designating dates when events, celebrations and other important aspects of daily life could take place. 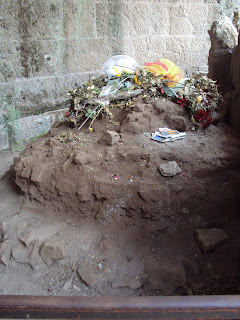 In front of the Regia, one sees what remains of the Temple of Caesar, built by Augustus to honor the deified Julius Caesar. The temple was built on top of the spot where his remains were cremated after his assassination, which occurred not at the Curia in the Forum, as is commonly thought, but at the Curia in the Theatre of Pompey. Today only the foundations are visible, and these are covered by a small wooden structure topped by GI sheets. Inside, some people still leave flowers and other tributes on the mound, and tour guides recite in sonorous voices Shakespeare’s, “I’ve come to bury Caesar, not to praise him!” 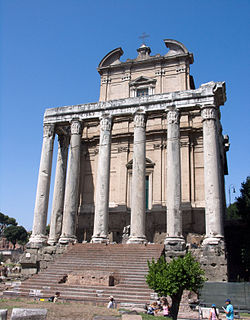 Just beside the Temple of Romulus is the Temple of Antoninus and Faustina, which was built by Antoninus in memory of his wife Faustina. This was later (7th or 8th century AD) converted into a church and as such avoided the destruction suffered by other buildings around it. Today it is known as the Church of San Lorenzo in Miranda. 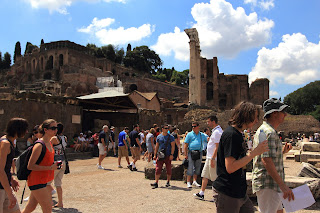 Beside the House of the Vestal Virgins are found three columns, all that remains of the Temple of Castor and Pollux, built in 484 BC and used not only as a temple but for military ceremonies, senate rituals and also a place where many plans and initiatives were discussed or undertaken. 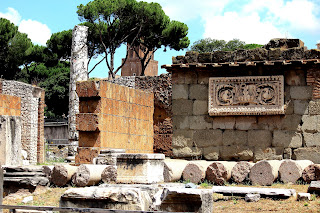 Fronting the Temple of Castor and Pollux are the ruins of the Basilica of Aemilia built in 179 BC, which consisted  of 2 levels. In the 5th century, as the legend goes, in this place, Lucius Verginius stabbed his daughter to death to prevent her from becoming a slave of Appius Claudius who desiring her, had by nefarious means, while her father was away at war, managed to have her declared his slave. This same Appius Claudius was one of the forbears (and the skeleton in the closet) of the Claudii, one of ancient Romes's most powerful families. 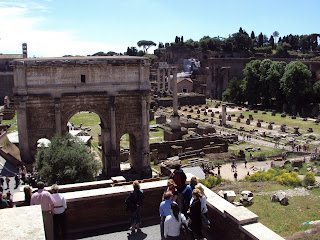 Near the Temple of Castor lie the ruins of the Basilica Julia, (the rectangular area seen here  behind  the arch of Septimus Severus) started by Julius Caesar and finished by Augustus Caesar. This functioned as a court where civil cases (centumviri) were heard. There were 45 chambers and the public was allowed to attend these sessions. Lawyers on both sides encouraged partisans to attend these sessions in the hopes of influencing the outcome by their vociferous support. You can imagine how raucous some of the sessions became. This burnt down in the 9th century AD. 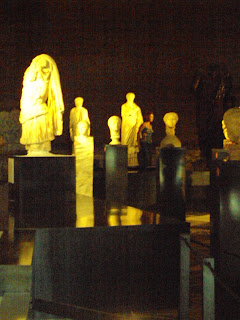 Near the Basilica Aemilia is the Curia Julia (the rectangular building) which goes back to 300 AD. This is the final form taken by the Curia which had been built and burned four times in its history. Caesar began building this and it was completed by Augustus. This was where the senators met. Two hundred senators at a time could be accommodated in the curia, seating on rows of seats along the long side of the Curia (today busts and statues are exhibited along this wall). The building still stands, but its huge bronze door now serves as the front door of the Cathedral St. John Lateran. 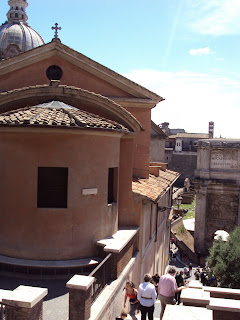 Beside the Curia is the Tullianum or the Mamertime prison which has two floors. The upper floor was where prisoners were kept and the lower floor was where they were executed. Enemies of Rome like Jugurtha from Africa, Vercingetorix from Gaul, the Gracchi brothers and the accomplices of Catilina were imprisoned and executed here. Two other prisoners of note were St. Peter and St. Paul. This is the main reason why the Church of St. Peter in Prison (on the right) was built over this jail. You can still go into this notorious place for the price of 5 Euros. 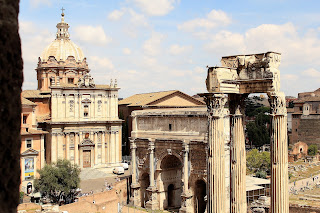 Toward the southernmost part of the Forum stands the Arch of Septimus Severus (behind the columns of Castor and Pollux) which was to commemorate this emperor’s triumphs in the east. He was father to Caracalla, a cruel ruler who in turn built the famous baths of Caracalla.
North of the Basilica Julia is the Temple of Saturn, one of the most respected monuments in ancient Rome and the place where the Saturnalia was held, a celebration of great importance to honor Saturn Cronos, the youngest of the Titans and the father of Jupiter, Rome's primary god. This was a week long celebration where schools were called off, presents exchanged and gambling was allowed even to the slaves. Today all that’s left of this temple are some columns.
The Temple of Concordia is found on the top of the forum. This was inaugurated in 366 BC as a symbol of reconciliation between the plebes and the patricians following a law passed guaranteeing that one of the 2 consuls would be from the ranks of the plebes. There is hardly anything left of this today. 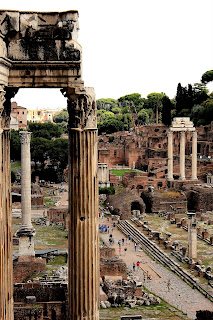 Beside the Temple of Concordia are the ruins of the Temple of Vespacian (seen here from the Tabularium). This was built by Domitian to honor his father and his brother Titus. 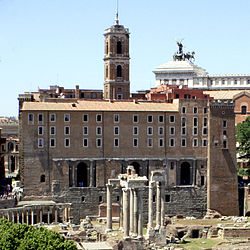 Behind the Temple of Concordia is the Tabullarium, which contained the Roman public records office. On top of this was the aerarium or treasure house of the Temple of Saturn. Today this is part of the Capitoline Museum, opened to the public and one can take a picture of the entire ancient site from its windows.


It is tiring to walk the ruins of the Forum especially in the heat of the summer. However, even for someone with very high expectations of the place like myself, and despite the initial dissapointment, doing it is rewarding. As I walked away from the Forum (the third time) in the direction of the Palatine Hill, I realized I had fallen victim to the magic of the place. The hours had passed unnoticed and I needed sometime to reorient myself to the present.
Posted by a dependent spouse at 12:21 AM