I’m sure most of you have eaten an oven baked, flat, disk shaped bread topped with tomato sauce, cheese and various toppings sometime in the past month? If you’ve eaten a pizza, then yes you have! Here in Rome there may be as many pizzerias as there are churches...or maybe even more! At any time of day you can enter one of these pizzerias and get a pizza to go. These are what is known locally as the pizza al taglio, rectangular shaped pizzas, with a wide variety of toppings and sold by weight. When you enter one of these places, you see a counter with different types of pizzas. You point at what you want; the person behind the counter will get his sharp pizza cutter, place it at a certain point on the pizza and will look at you. If you shake your head, he’ll move it further down, when you nod your head, he will proceed to cut that portion for you. He weighs this on his weighing scale right there on the counter and then cuts it in half and puts it together with the filled side facing each other (sandwich style) and wraps it up. Eating pizza this way as one walks around or sits at a curb side is a common sight. This brings the pizza back to its origins as a “street food”. 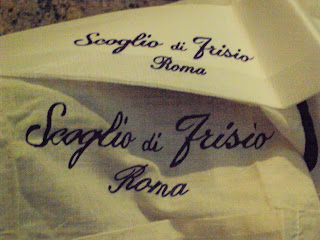 Scoglio di Frisio, a restaurant on Via Merulana which first opened its doors in 1928 and still owned and ran by the same family offers pizza making courses. Family members on holiday in Rome and I decided that learning to make pizza here in the Land of The Pizza would be a fun family thing to do, so we attended the restaurant’s one day course. The present owner of the restaurant himself welcomed us and gave us a mini lecture on the origins and the principles of making pizza. As he spoke, it became obvious to us that here was a man who was not only passionate about what he did but also loved and enjoyed it! 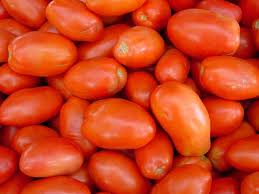 As our host explained it there are three major ingredients in pizza, the first is the tomato. Flat breads, like naan, pita, focaccia and many others have been part of traditional diets all over the world. In Italy the focaccia became the pizza when tomatoes were added as a topping. Tomatoes came from the Americas in the 16th century. The pomodoro or “golden bowl” was for the better part of 200 years, considered a decorative plant. Sometime in the 1830s, a poor woman in Naples decided to add the pomodoro to her bread and created the pizza. These “pizzas” were sold from open air stands and were considered “poor man’s food”. 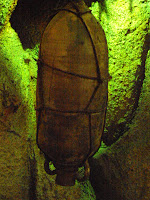 The second major ingredient is olive oil. This “golden liquid” was used from prehistoric times in and around the Mediterranean basin as seen from the discovery of amphorae, the earliest of which was dated 3,500BC, used to contain this has been found.  Olive oil came to southern Italy around the 8th century BC. Before olive oil, animal fat was the oil used for cooking, but with the advent of olive oil, vegetable fat came into favour and the Italians acquired the Mediterranean “mentality” in terms of their food preparation. 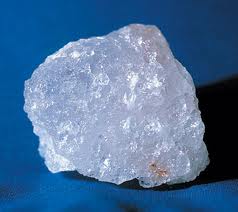 The third very important ingredient in any pizza is salt. Salt was a valued item as it was essential in preserving food and thus eliminating dependence on seasonal availability. Some have called salt the foundation of civilization. It was very difficult to obtain and was therefore a very valued trade item. In Italy, legend has the Via Salaria an ancient road being built by men who were paid in salt (thus the origins of the word salary) for their work. Historical accounts however, say that this road was so called because the Sabines, the original “salt merchants” used this route to fetch salt from the marches around the Tiber. No matter which account you prefer, Via Salaria was apparently already in existence in the Bronze Age.

The modern pizza made its appearance as the Pizza Napoletana, which was simply the pizza pie with tomato to which cheese was added in 1889. According to our host, King Ferdinand used to visit the poor neighbourhoods in Naples in disguise just to eat this.

When Queen Margherita of Savoy visited Naples in 1889, a Neapolitan chef, Raffaele Esposito created a pizza with tomatoes, mozzarella cheese and basil to represent the colors of the Italian flag, in her honor. This pizza came to be known as Pizza Margherita.
According to our host, there are only two true Napoletana pizzas, they are the Marinara which contains tomato, oregano, garlic and extra virgin olive oil (no sea food) and the Margherita which contains tomato, mozzarella and basil. To be considered true Napoletana Pizzas, these rules of the True Napoletana Pizza Association must be followed:
1.      Must be baked in wood fired domed oven at 485 degreesC for no more than 60-90 seconds
2.      Base must be hand kneaded and must not be rolled with a pin or prepared by any mechanical means
3.      Must not exceed 35 cm in diameter or more than 1/3 of a cm thick at the center
After all these interesting facts, it was down to business for us. So we donned our aprons and chef’s hats and proceeded to the workstation of the pizzaiolo (the pizza chef). The first thing he explained to us was that the flour he used was flour for pizza which he said could be wheat flour which is at least 3 months old so that it has no residual moisture left. He then measured flour, water, oil and salt and proceeded to incorporate them. 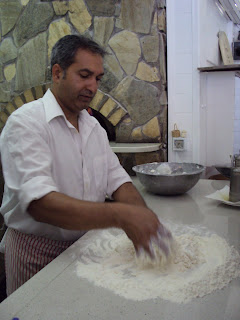 Incorporating the olive oil, yeast, water and flour is an art in itself. First make a very large well in the center of the mound of flour, basically pushing all the flour to the sides forming a circular wall of flour around where you add the liquid and slowly with your fingers bring in the flour gradually until you can gather it into a ball, then push the remaining flour to the sides and start the kneading process. This is the physical part of pizza making where you fold the dough in and then push out with the palm of your hands until the dough is pliable and no longer sticks to your fingers. When we asked him how long we had to do this, he says “no time, you need to feel when it’s right!” 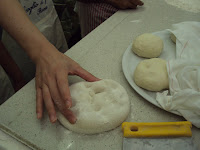 When the dough “feels right” you then cover with a damp cloth and make it rise. Asked as to how long we should make it rise, he again replied “no time, you need to feel”. Basically it is done when you push a finger into the dough and it makes an indentation and doesn’t spring back.
After this, you need to transform the ball of dough into a flat circular shaped pie and again this is done with your hands. We all had a hand at this, and even if ours didn’t come out as circular as his did, they still looked pretty, to us at least.
Then tomato sauce is spread on top. The tomato sauce is simply canned tomatoes, remove the seeds, squash all of them and add some olive oil and some salt. Then the toppings are added, whatever you want and then last, the mozzarella cheese. Drizzle a little bit of olive oil on the top and put it into the wood fired oven which has a temperature of 485 degrees centigrade for no more than 60 to 90 seconds. For our home ovens we would need to first put the tomato sauce on the pie, put that in the oven (at its highest setting) for 10 minutes, remove from the oven, add the toppings and the cheese and olive oil and return to the oven for another 5 minutes.
The demo pizza made by our pizzaiolo was a Napoletana pizza, with a soft pliable thin crust. He told us that in Rome they preferred a thin crusty crust, using only 80 grams of dough as compared to 250 grams.
So, where our pizza’s true Napoletana pizzas? They were hand kneaded and hand rolled, they were baked for no more than 90 seconds in the restaurant pizza oven and were more or less round, so conforming to the basic requirements. However, free to add whatever toppings we wanted...we strayed from the 2 true Napoletana pizzas, adding artichokes, prosciutto, mushrooms...you get the idea. Then the final test which we were told was the most important, “rely not on the eyes but on the nose”. Smelling our pizzas after they came out of the oven.... hmmm.....yes.... they passed the test for sure! 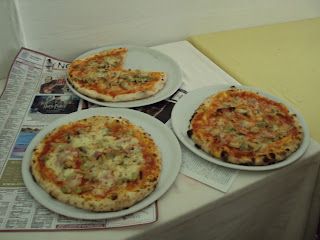 Posted by a dependent spouse at 12:03 AM