Bernini's "The Ecstasy of St. Teresa of Avila"

Living in Rome, during that magical year, made me fall in love with The Eternal City! Sadly, I had planned to explore and discover much more of Her than in the end, I was able to. When we left, I vowed to return, if I could, to visit some sites which at the end of our stay remained elusive. Visiting familiar and favorite places would be on the agenda too, of course!

One of the places I failed to visit at the time was the Church of Santa Maria della Vittoria. Another church? Well yes, another of the thousands of churches in and around Rome, except that this one was home to Gian Lorenzo Bernini's The Ecstasy of Saint Teresa! 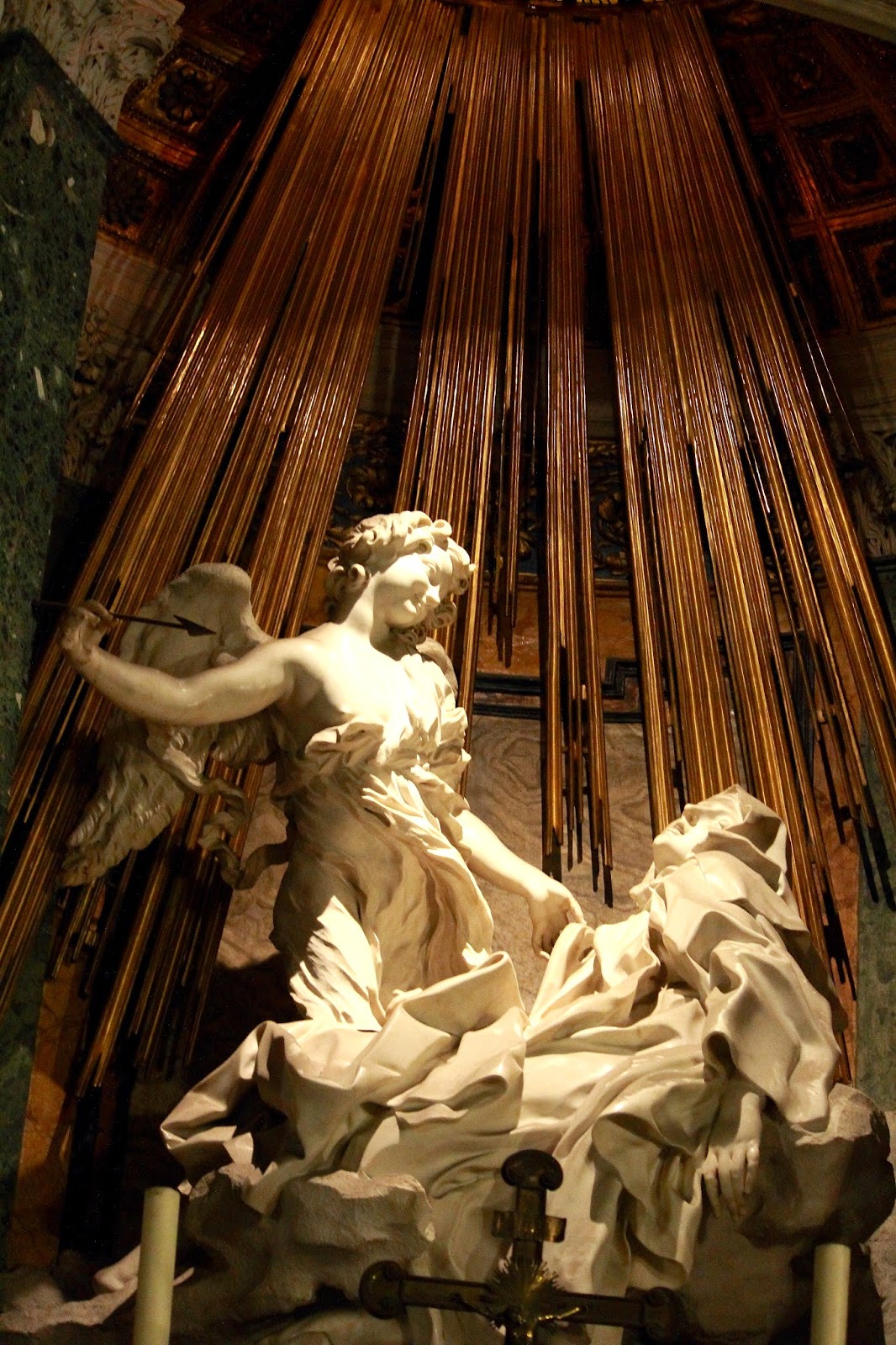 Santa Maria della Vittoria is unremarkable (from the fascade at least), being one church among many in Rome. When we lived in Rome, I would walk to Via 20 Septiembre from the Piazza della Republica. The church is located right on the corner where Via 20 Septiembre intersects with Largo Santa Susanna. I would pass this church noticing only that it was mirrored on the other side by another church. 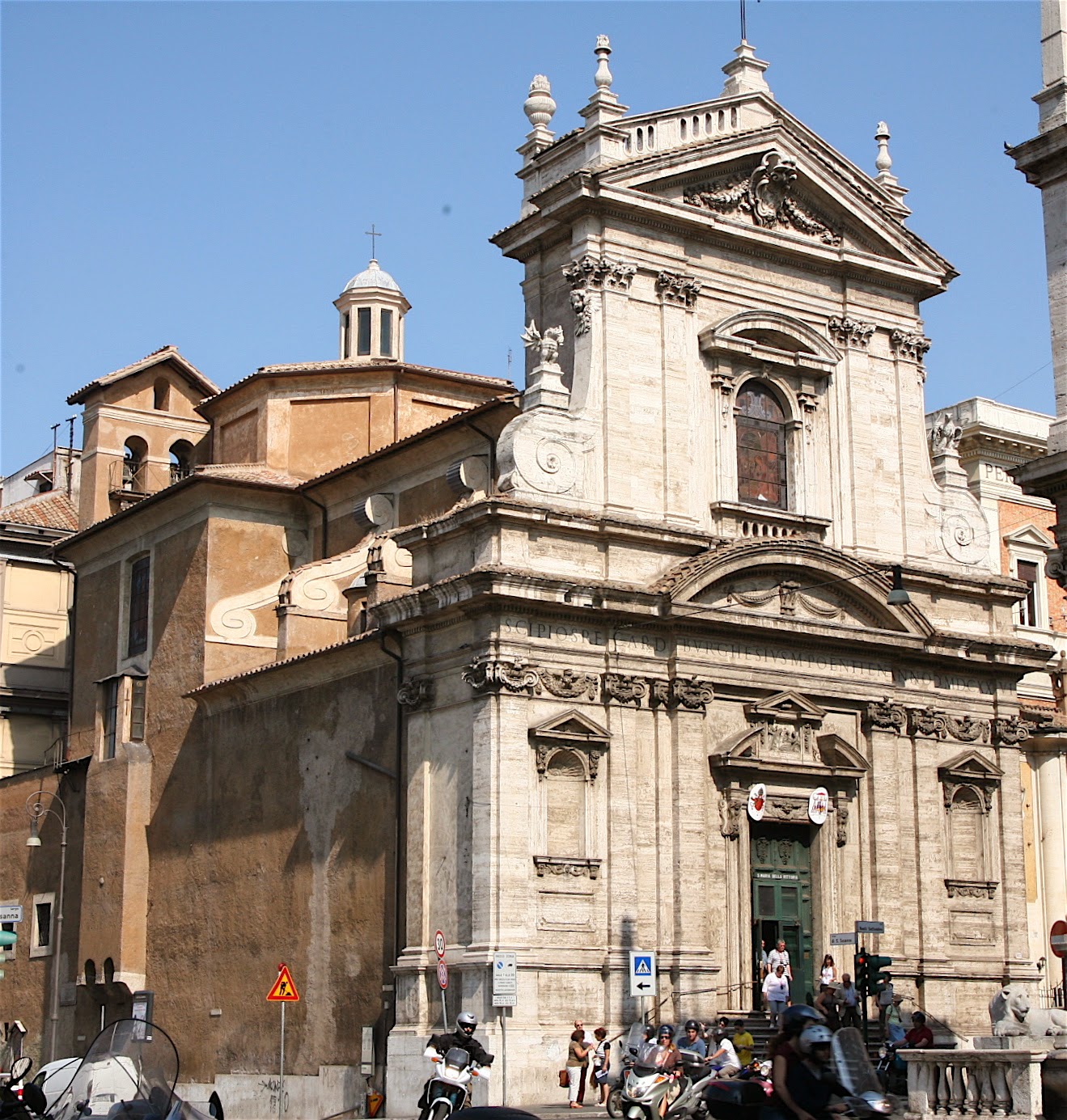 I had heard about Bernini's Ecstasy of St. Teresa, but was under the impression that it was in one of the churches in Trastevere, the church of San Francesco a Ripa.  In fact what is in Trastevere is Bernini's funerary monument to Blessed Ludovica Albertoni, which we had gone to see but were unable to, as the chapel where the sculpture was, was under restoration at the time. Because there were too many places to visit, too many "masterpieces" to see, I failed to properly research where I could find the Ecstacy..

Gian Lorenzo Bernini, another of those "Renaissance" men, like Da Vinci, and Michelangelo, may have created or more definitely was one of the dominant figures of Baroque style sculpture. His work is seen in parks, piazzas and churches all over Rome, some of which I saw and took pictures of. He was also an architect, a playwrite and a set designer par excellence!

A perfect example of the latter is the Cornaro Chapel in the Church of Santa Maria della Vittoria, which was designed and built by Bernini as the perfect setting for his Ecstasy of St. Teresa of Avila. 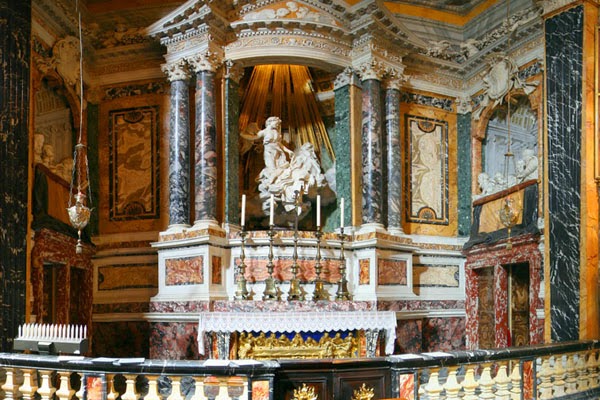 The chapel looks like a mini theater, with the Ecstasy on center stage, light from the skylight above dramatically enhanced by gilded rays behind the statue, and on the sides as if in the box seats are "the witnesses". On the left side are 4 members of the Cornaro family and on the right side are 4 representatives of the church. And in the orchestra area, would be us. Interestingly, as my husband thought or strangely, as I did, all the "witnesses" were male! With this theatrical setting, and the powerful representation of the ecstasy, critics are divided as to whether Teresa is depicted as being in the throes of experiencing an intense state of divine joy or a more human-like physical orgasm.

The sculpture is a direct representation by Bernini of an account  of religious ecstasy as described by St. Teresa of Avila in her autobiography. The passage:

"He appeared to me to be thrusting it at times into my heart, and... to leave me all on fire with a great love of God. The pain was so great, that it made me moan; and yet so surpassing was the sweetness of this excessive pain, that I could not wish to be rid of it. The soul is satisfied now with nothing less than God." 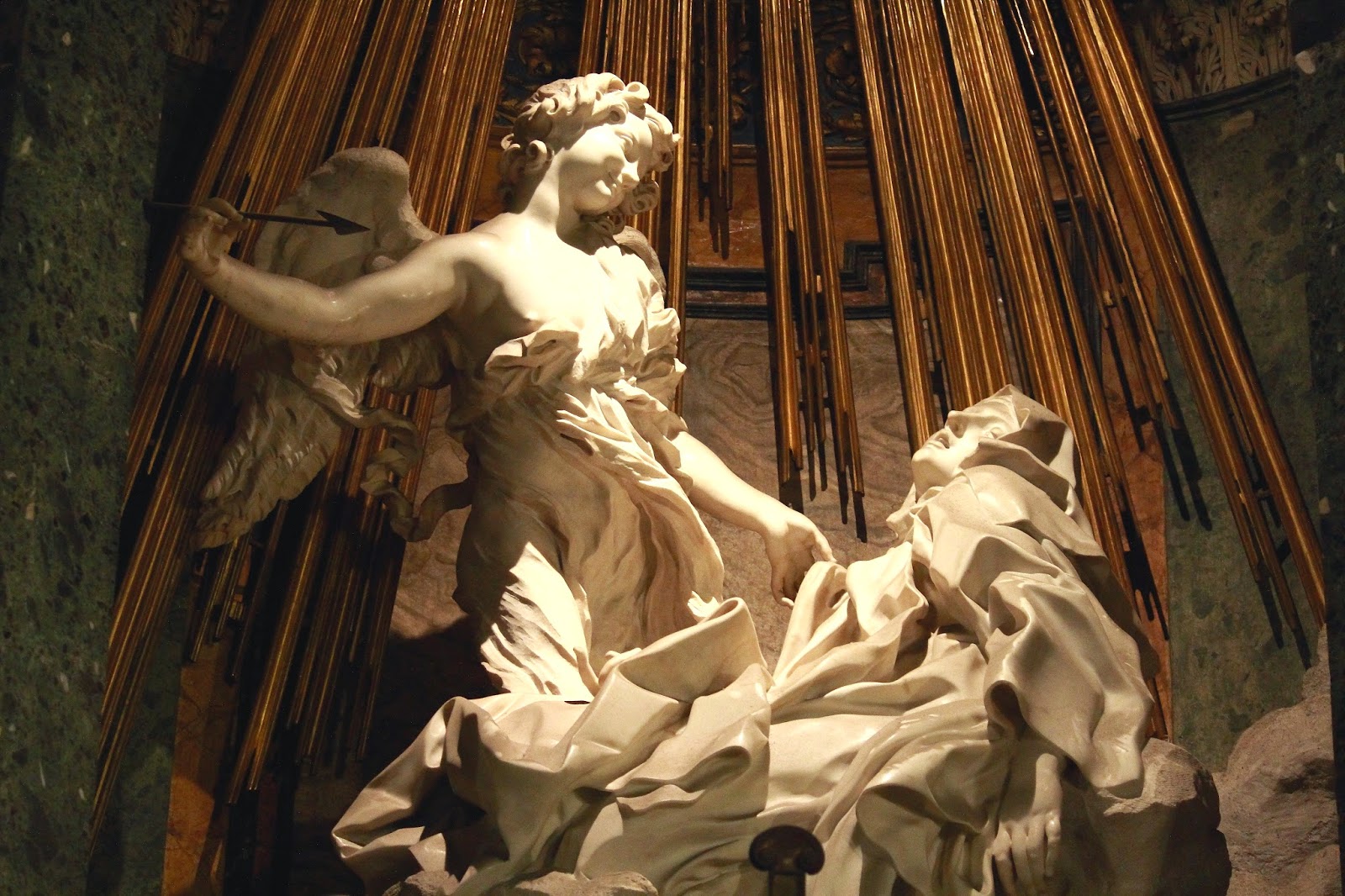 The intensity of the experienced ecstasy is mirrored in her face. 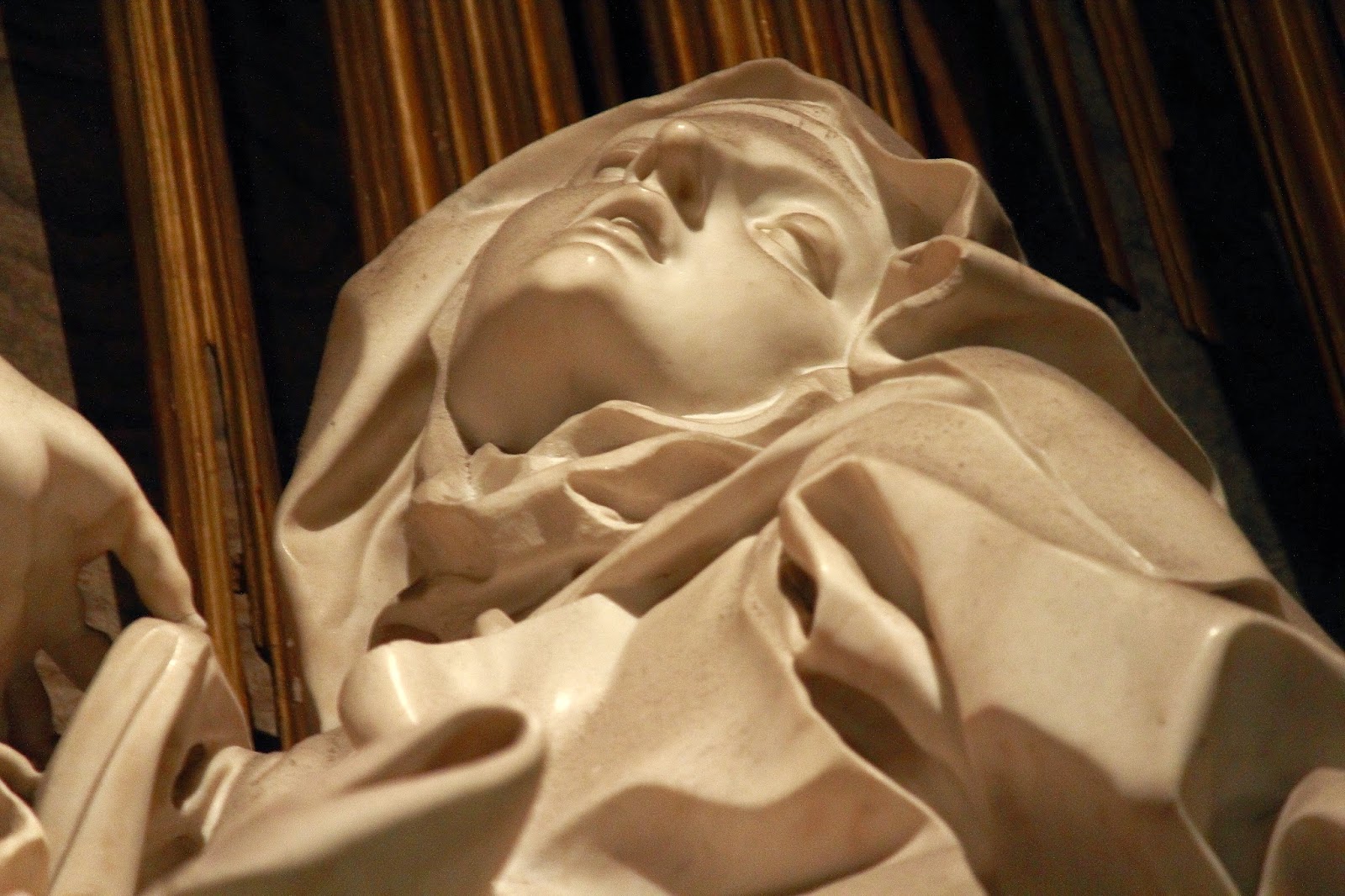 Her limp hand and languid fingers: 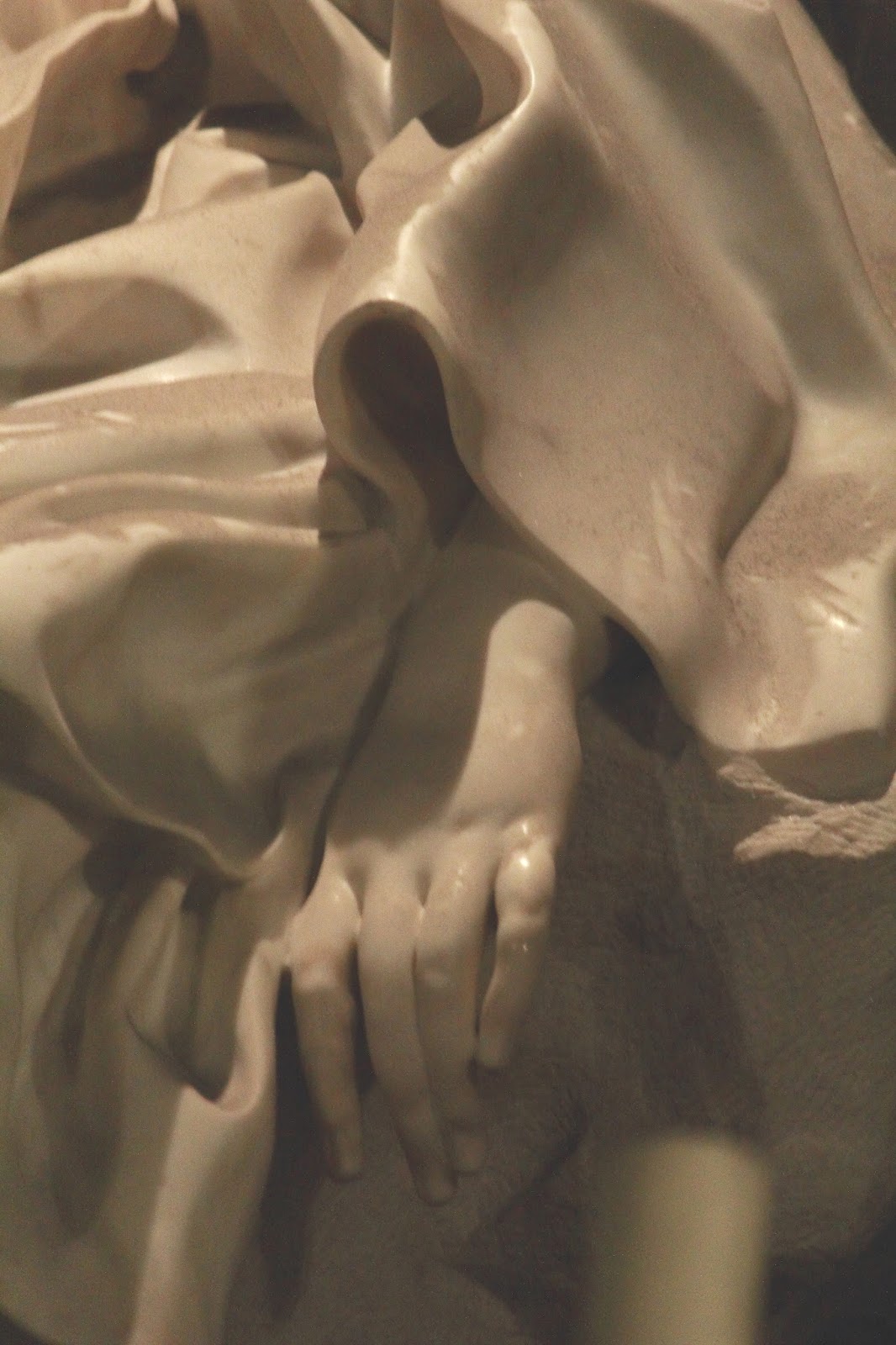 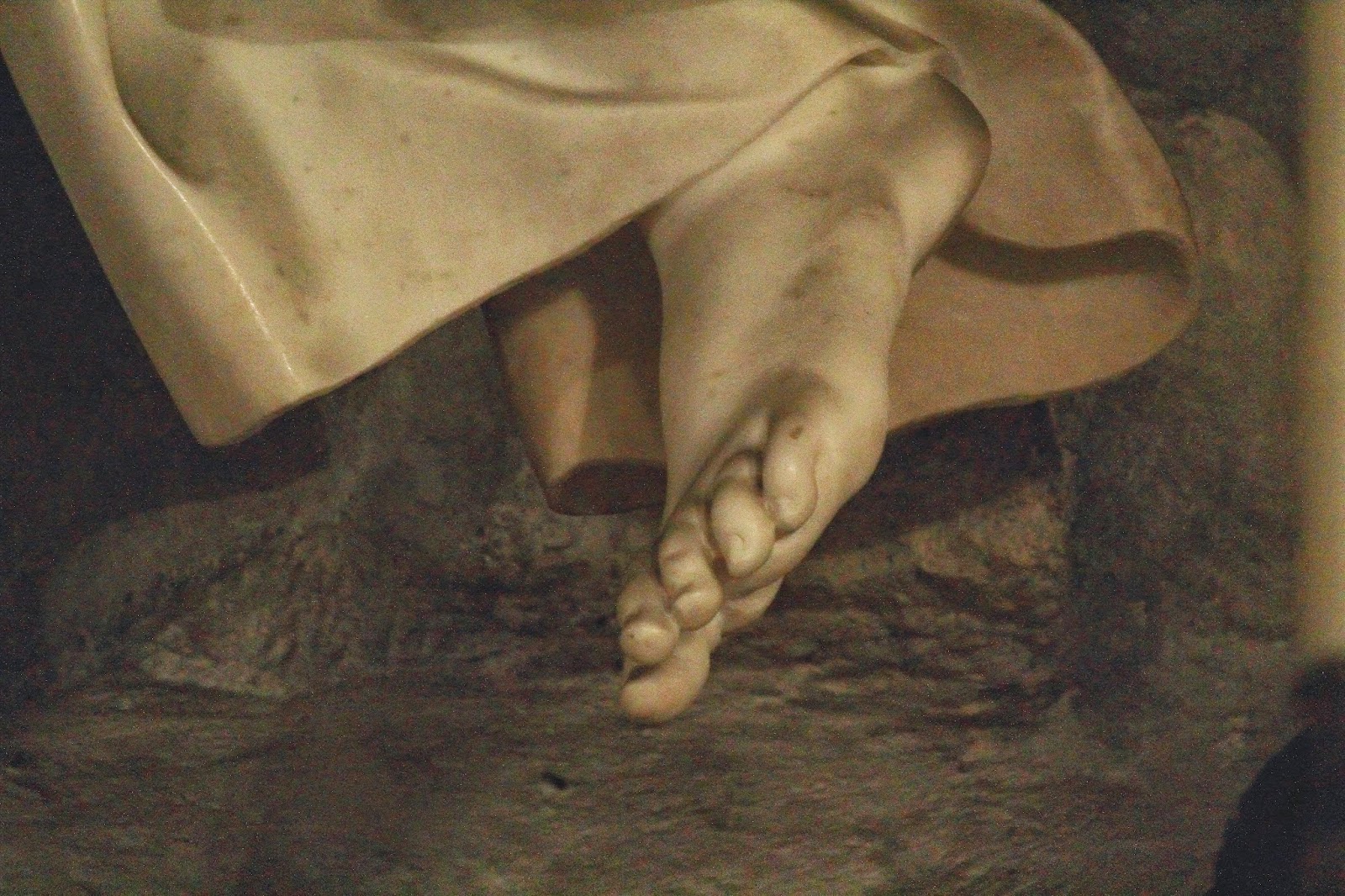 The ruffled folds of her habit: 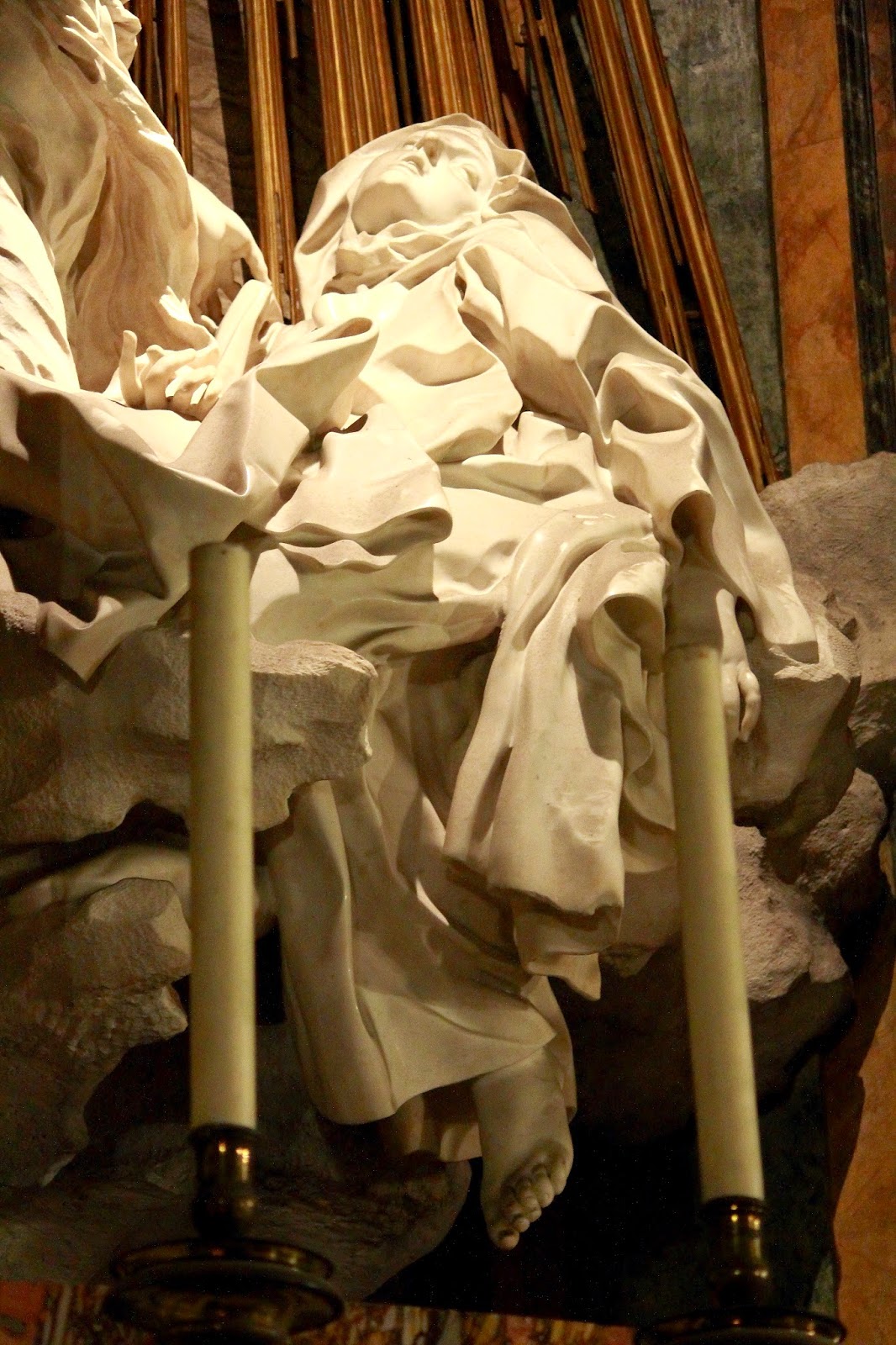 The Angel seems to be smiling as he readies himself to pierce her with his arrow: 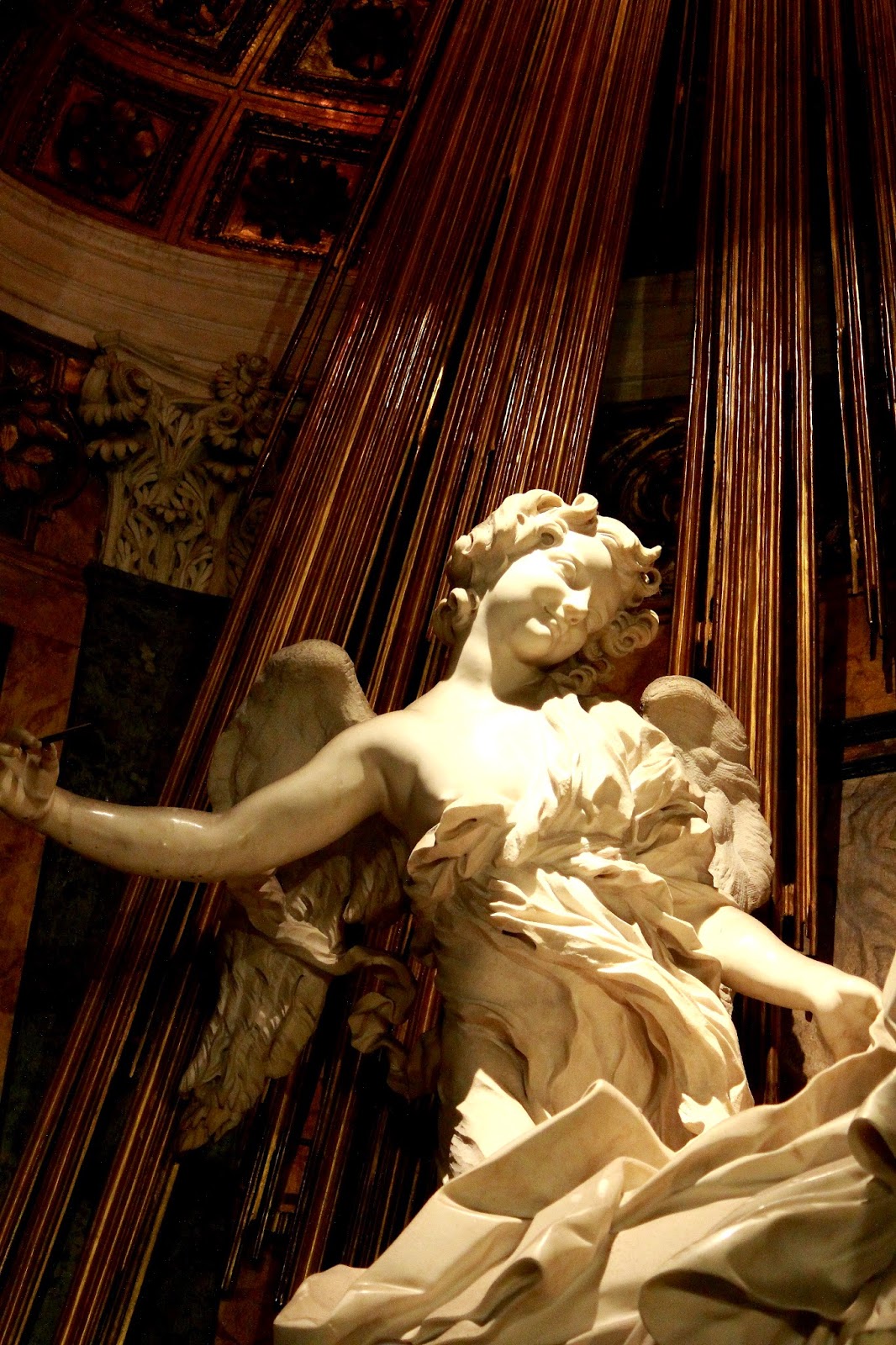 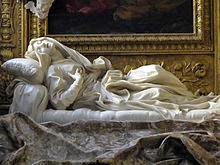