One of the more interesting exhibits I have visited this summer here in Rome is the "Once We were Romans" exhibit in the Museo Nationale Romano in the Palazzo Massimo, and the most interesting part, for me, was the display of the excavated remains of the houses (domus) and villas of the wealthy Romans.
﻿﻿

﻿There were three types of Roman houses at the time of Augustus Caesar. The first two were the homes of the "elite" , the nobility, the wealthy, the powerful upper class Romans. These were the villa, which were country homes and the domus, usually located in the city. Most of the wealthier Romans, however, owned a domus in the city and a country house or villa.
﻿﻿

Then there was the insula, which were rented accomodations, essentially a  combination of modern day  condominiums and tenement housing. Here the “wealthier” tenants lived on the ground or lower floors with larger, cleaner and better appointed accommodations. The less able were housed on the higher floors, the higher one went, the worst the living space became, until one reached the top floor where the living space was barely habitable. Accomodations on the top floor of the Insula were only taken by people who could not afford anything better. These were usually makeshift additions to the building and being on the top floor made it very difficult to escape if a fire ever started in the building. And fires happened with great frequency in ancient Rome! This is in contrast with today's condominiums where the higher one goes, the more expensive the accomodation becomes.
﻿
﻿ The most opulent domus in ancient Rome had to be Nero's Domus Aurea or Golden House, whose facade was rumoured to have been coated with gold. Ok, technically this was not really a domus but Nero called it his domus, so a domus it is. Nero's domus was razed to the ground by Vespasian, over which he built the Coliseum. Trajan later built his baths over the rest of the complex and it was pretty much forgotten until recent excavations unearthed intact portions of it, reminders of the magnificence or opulence of the place. Unfortunately, these ruins are closed for restoration at the moment.
Livia’s villa, found in Prima Porte, a suburb of Rome and presently still being excavated, may be more representative of the ancient villas of the nobility than the Golden House. This villa was part of the dowry of Livia Drusilla when she married Octavian, later known as Augustus Caesar.

They discovered a windowless room with painted frescoes of birds, tress, flowers and fruits of the time on all the walls, which they restored and moved into the museum. It is quite beautiful! 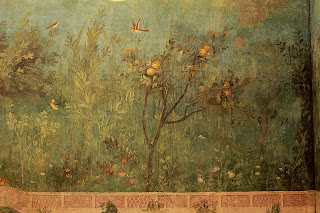 I sat in the middle of this room for a long time. The colours were very soothing,  and the rendition of the fruits, flowers and birds were detailed and very naturalistic. 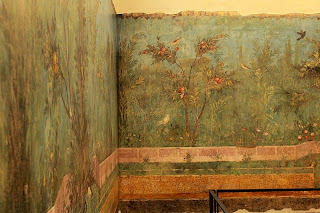 The Domus was smaller than the villas, being limited by the available space in the city. The museum had the remains of Aggrippa's (Augustus' friend and son-in-law) Domus/Villa found in the Trastevere Area.﻿

﻿﻿
﻿
﻿ ﻿﻿They were usually rectangular in shape divided into two areas, with a garden and a peristyle off to one side and the atrium on the other. It was surrounded by a perimeter wall with a front door sporting a knocker made of bronze.  One enters the domus through the vestibulum or entrance hall which were lined with frescoes and had mosaic floors. Most of the floors were made of marble but some of the more opulent villas had floors made of alabaster.

﻿﻿
﻿ The main part of the house was the atrium where guests and clients were greeted. In the middle of the atrium was a "water feature",  underneath an opening in the roof, which was a shallow sunken pool collecting rain water which was then stored in a cistern for the use of the household. This was lined with marble and around it, a floor of small mosaics. The Atrium contained a statue and an altar to the household god.  Around the atrium would be found the family’s main rooms. 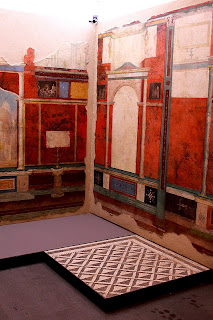 ﻿
﻿
The tablinium or office was where the master would meet his clients. This was usually located between the atrium and the peristyle. 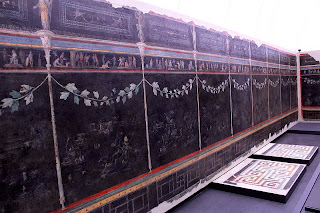 The dining room or triclinum was also elaborately painted with frescoes and had mosaic marble floors. These contained coaches around a low table. The colors used in the dinning room were usually darker than those of the other rooms.

There were no kitchens as we know them today. Because food preparation was a task left completely to the slaves, the area where this was done was small, dark, poorly ventilated and relegated to an obscure area of the house.

Most domus had a bathroom, some only in the form of latrines, since most Romans made it a habit to visit the public baths not only for their daily bath but as a place to meet people and do business. Most domus had running water and sewage disposal.

The Romans loved color, they put a lot of that around their temples, their monuments, their buildings. Their homes were the same, brightly colored and containing precious works of art, frescoes, marble inlays and statues and beautiful mosaic floors. They were proud of their homes, using these to mirror their accomplishments and enhance their reputations. But more than this, they treasured them as their place of refuge, their safe haven.

Posted by a dependent spouse at 8:31 AM