A good friend, originally from Milan who had moved with his wife to Sienna and raised his family there, invited us to stay with them for a couple of days. Being at the tail end of our Roman adventure, we accepted with alacrity.
We were going to take a train, which meant going to Florence first and then from there taking another train to Sienna. Our friend advised us to take the bus instead which  offered a more direct route. We took the bus from Rome's Tiburtina bus station, located just beside the Tiburtina Metro stop.  In just under 3 hours we were pulling into the bus station in Sienna, where our friend was waiting for us.
Our friend lives in the outskirts of Sienna, right in the middle of the Chianti countryside, Tuscany's crowning glory. In under 6 minutes, driving along a winding two lane street through vineyards and olive groves, we reached his place, a converted medieval chapel, with an ancient olive tree guarding the entrance.

The facade is untouched, as Siennese law prohibits the
alteration of structures like these. Indoors, everything is modern but the original walls are as they were. Everything inside is built away from these walls, therefore, the steel frame that supports the rooms, the floors etc. of the inside is built around a foot from the original walls.
Because building on land in and around this area is prohibited, one is afforded panoramic views of the Chianti countryside. 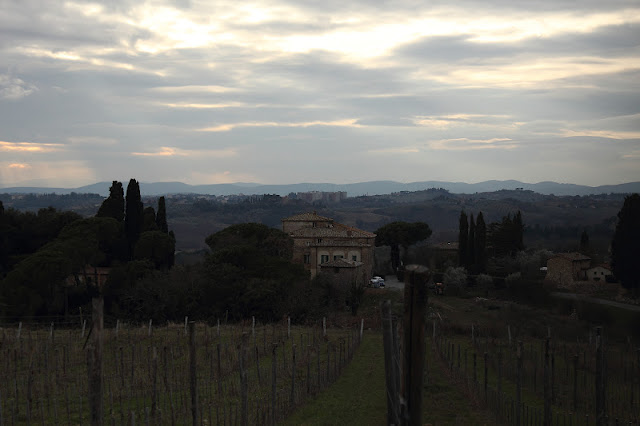 Before dinner that night, our friend took us on a tour of his olive grove, which he had harvested in October. He has a small grove judging by the standards of his neighbors, this being merely a hobby for him.

Handpicked olives are brought to the village press, then bottled as extra virgin olive oil.

We were to taste this later and I have to say it was delicious, and the best I have ever had! With its decidedly greenish tint and a slightly nutty tang, I dare say my friend's olive oil cannot be found anywhere in any market in the world!

Walking back to the chapel, we passed by this ancient olive tree beside an ancient shrub of rosemary. 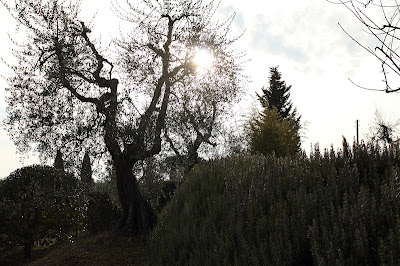 The ancient, gnarled olive trees, the dormant grape vines, the intermittent hooting of the resident owl, the fragrance of rosemary mingling with the rather chilly early evening breeze made for an impressive not to be forgotten experience! But there was more to come!

That night, our host served us a leg of spring lamb cooked on a spit in his stone fireplace. As we waited for the lamb to cook, we sat around the fireplace, enjoying the warmth and sharing a  delicious Chianti!  The lamb was accompanied by a mixed green salad from his vegetable garden and some artisan bread dipped in his delicious olive oil.


The next day, our host brought us for a drive around the Chianti countryside. Poets, painters, artists as well as ordinary visitors and even harassed tourists, past and present, who have come to Tuscany, and more specifically Chianti country, have never failed to fall in love with her! I was lulled by the beauty of the passing countryside, impressed by the large imposing villas and their formal gardens, thrilled by picturesque family ran hotels and tickled pink by humorous displays like these:


And then there is Sienna! (I will write about our visit to this beautiful place in my next blog).

We stayed 3 nights with our friend, and when it was time for us to return to Rome, we needed to wake up early to catch the morning bus. As we hurried out the front door, we were treated to this glorious view of the rising sun: 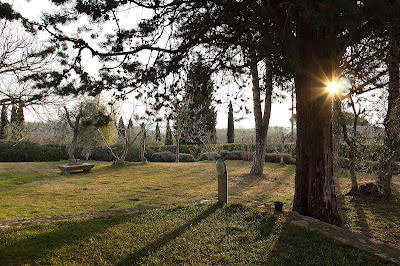 Posted by a dependent spouse at 12:55 AM