Rome is full of treaures, historical ruins, works of art, imposing architecture, engineering marvels etc., some in full view, others displayed in museums both public and private. To get into these museums one needs to fork out a certain amount of euros. There are however repositories of some of these treasures that are open and available to anyone, the only requirement to enter is one be dressed "appropriately". These are the churches in and around Rome. It has been an experience for me going into these churches sometimes for the purpose of hearing mass and then finding myself going around taking pictures after. There has been those times too where I have gone to a specific church to look at say a statue by Micheangelo or a painting by Caravaggio and ended up going to mass as well.
Among the thousands of churches, there are three churches in Rome that have been given extraterritorial status similar to that of foreign embassies. Article 13 of the Lateran Treaty of 1929 between the Holy See and Italy states: "Italy recognizes the full ownership of the Holy See over the patriarchal Basilicas of St. John Lateran, the Sta. Maria Maggiore, and St. Paul Outside the Walls, with their annexed buildings." These buildings are patrolled not by Italian police but by police agents of the Vatican City State. These Basilicas and St Peters are the only four “major” Basilicas in Rome and the Papal Basilica of Saint Mary Major (Basilica di Santa Maria Maggiore) with it's Byzantine interior, one of the best preserved in Rome is the only one dedicated to the Blessed Virgin.
It is said that the Basilica stands on the site of an ancient temple to the goddess Cybele. According to legend the Virgin Mary appeared to Pope Liberius in a dream, asking him to build a church in Her honour on the top of the Esquiline hill, on the spot where he would find a patch of newly fallen snow. The next day, August 5, at the height of the Roman summer, snow had fallen on the spot where Maria Maggiore is now located. At the top of the altar of the Borghese Chapel in the Basilica, the event is immortalized in a bas relief sculpture of Pope Liberius tracing the perimeter of the church in the snow. This event continues to be celebrated every year on the 5th of August. During the noon mass, white rose petals are showered on the congregation from the ceiling and at night the fire department operates a snow making machine in the Piazza in front of the Basilica.
﻿﻿ 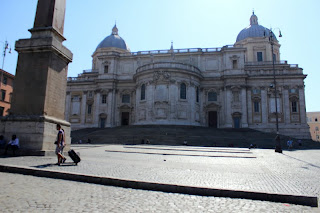 ﻿﻿The Basilica when viewed from the Piazza of Santa Maria Maggiore stands behind a column on top of which rests a bronze statue of Mary. The eighteenth century facade has a porch with five openings on the bottom and three on the top which covers the XII century mosaics of the antique facade. Clearly visible from the piazza is also the highest campanile in Rome. On the other hand, viewed from the Piazza Esquilino, one sees the apse area and the domes of the Borghese and Sistine Chapels. 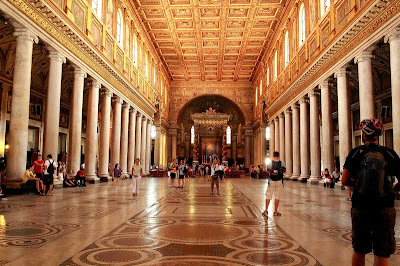 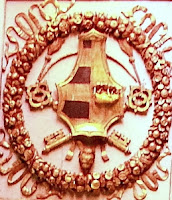 Entering the Basilica, one is immediately struck by the brilliance of the gilded ceiling reportedly with gold sent by Queen Isabella as part payment of a loan extended by then Pope Innocent VIII to finance Christopher Columbus’ voyage to the New World. The gilded ceiling bears the coat of arms of the Borgia pope Alexander VI, (yes that Alexander) who had a hand in the building of the Basilica  while serving as its Archpriest. He undoubtedly had expensive and impeccable taste, this controversial pope, and was responsible for building other noteworthy  structures, as well as the aquisition of art masterpieces during his term in office.The beautiful cosmatesque mosaic floor was made by Cosmati, considered the “master of marble” and from whose family workshop these geometric decorations originated. 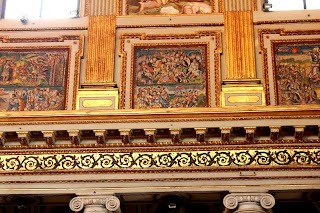 The central nave, is lined on both sides with a series of mosaics from the fifth century depicting scenes from the Old Testament. Below these are Athenian marble columns, 40 in all, which may have come from some more ancient structure and made to fit. On top of the mosaics are frescoes and windows. 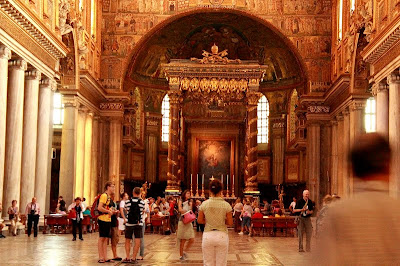 Right in the middle of the aisle is the ornate canopy, crowned by the triumphal arch, under which only the Pope can say mass. 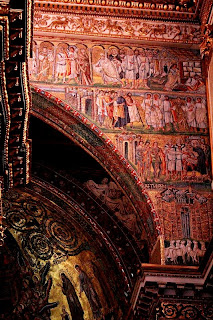 The mosaics of the triumphal arch depict scenes from the life of Christ. The mosaics are vivid and dazzling! 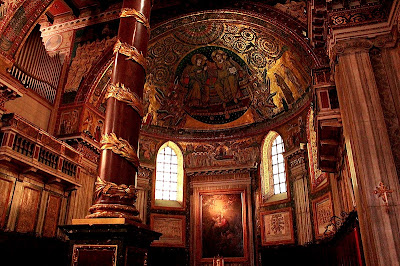 And crowned by the arch is the mosaic on the apse, completed a bit later than the arch but just as awesome. This mosaic depicts the coronation the Virgin Mary as Queen of Heaven, surrounded by the saints, angels and pope Nicholas IV who commisioned this. Underneath is the nativity painting by Mancini. 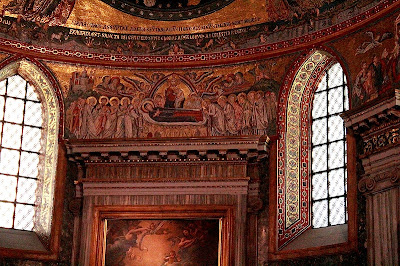 Right above the nativity painting and below the apse mosaic is a mosaic depicting the death of Mary.


﻿
﻿ On the left transept is the Borghese chapel with its grand altar made of lapis lazuli, on which is mounted the icon of the Salus Populi Romani, which tradition says was painted by Luke the Evangelist, the frame of which is supported by gilded angels. The entire chapel is made of marble with bronze and stucco angels all over the ceiling and walls, and at the center of the chapel is one of the two domes of the Basilica. 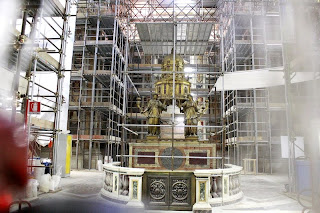 On the right transept is the Sistine Chapel (not to be mistaken for the one in the Vatican) which is undergoing repairs. I was able to take a picture of the altar, which I think is located at the center of the chapel. This chapel has the other dome.
﻿﻿﻿﻿﻿﻿﻿﻿﻿﻿﻿﻿﻿﻿﻿﻿ 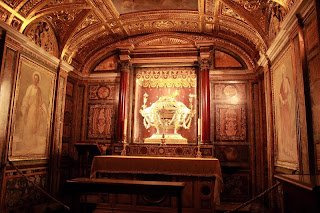 ﻿Between these two chapels in the area called the confessio, one sees a giant kneeling statue of Pope Pius IX, one of the longest serving popes, worshipping the reliquary in the altar. The reliquary made of rock crystal and silver is said to contain some wood fragments from the manger on which the Infant Jesus lay. On Christmas morning every year, this reliquary is brought around the Basilica in procession and then displayed on the high altar. 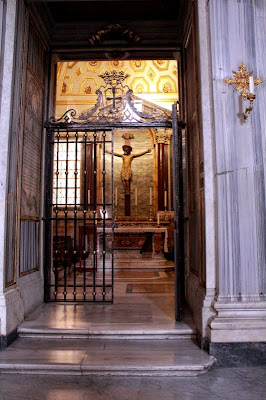 There were a lot more treasure on display at this church, one that struck me was the beautiful wooden cross from the first half of the XV century which is housed in the Chapel of the Holy Cross. On the day I visited, as luck would have it, a group of Benedictine monks were chanting in prayer. It was quite beautiful! 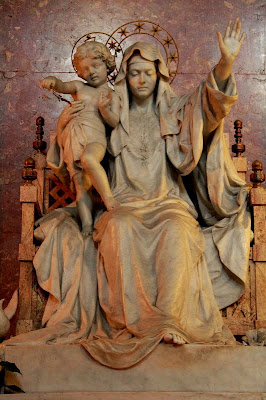 The other statue I liked was the statue of Regina Pacis, commissioned at the end of the First World War. The Virgin has a beautiful but sad face. She carries the Child Jesus and her left arm is raised as if to say “Stop”. This is by far the most proactive statue of Mary that I have seen. 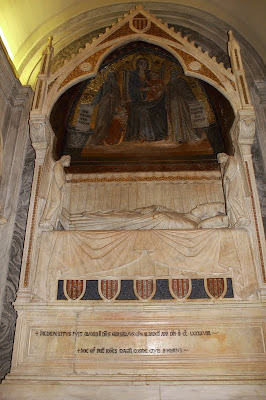 Near the Sistine Chapel, one comes across the tomb of Cardinal Gonsalvo Rodriguez, Cardinal bishop of Albano, a rather elegant tomb topped with a mosaic. This tomb is  said to be the work of Giovanni Cosma, a member of the marble artists Cosmati family.

Outside the Sistine Chapel, and on the steps off to the right side leading to the sanctuary, I came across my greatest discovery, the tomb of the Bernini family, including the great Gian Lorenzo Bernini himself. 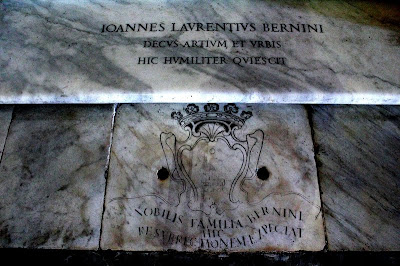 It is very simple, not even a tomb, just a stone slab. How ironic that one of the greatest baroque artists, a master of the ornate and the dramatic would choose to be buried in the simplest of tombs. Here was a nice paradox; I am inspired to go treasure hunting again, this time in search of Bernini!

Posted by a dependent spouse at 1:46 AM