Some people say that pasta was brought by Marco Polo to Italy from China. But Italians will tell you that long before Marco Polo came back to Italy, the Italians were already enjoying pasta in some form or the other. According to an Italian friend, archeological sites have found remnants of some form of pasta from the Etruscan times. According to this same “source” the first kind of pasta “lagare”, made from flour and eggs but baked on hot stones, may well have been the predecessor of the lasagne. Another theory is that the Arabs brought the pasta to Sicily, which may according to my friend be given credence by people who believe like Goethe that "Sicily is the clue to everything". Origins (and other noodle cultures) notwithstanding, pasta; spaghetti, fussilli, penne, fettucini etc. in all its shape and sizes today is as Italian as .....
Pasta in all its form and sauces is served in any of the numerous tavolas, osterias, bars and restaurants galore here in Rome. I have eaten in many of these, just stopping anywhere when hunger pangs strike, which for me come consistently at 12 pm for lunch. I invariably end up ordering a penne al ‘arrabiata or spaghetti con vongole. I have never had a really bad pasta here in Rome but there are places, places I have gone back to which I would consider a cut above the rest.
Spaghetteria L’Archetto 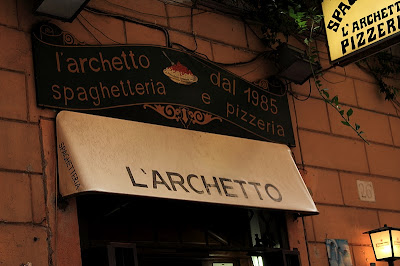 We found this place by accident, as we were exploring the area around the Fountain of Trevi. In one of the side streets coming from the Fountain on Via Archeto, we came upon this restaurant and decided to walk in. And we’ve been going back ever since, and bringing guests from home. Living up to it's name, the menu consists of a thick book of different sauces for ..... spaghetti!

They have a rather thick menu with other items but many, many pages are devoted to spaghetti sauces. They have tomato based sauces, cream based sauces, pesto based sauces ragu and meat based sauces and even fish and crustacean based sauces which are available only on Tuesdays and Fridays. They even have spicy sauces, one of which passed the chilli requirements of a Malaysian friend! It is very difficult to choose, but we have managed to try a lot of them since that first time. We’ve had vongole, bacailloli, carbonara, putanesca, arrabiata, wild mushroom and even one called “Nuclear Bomb”, a pesto based sauce with broccoli. 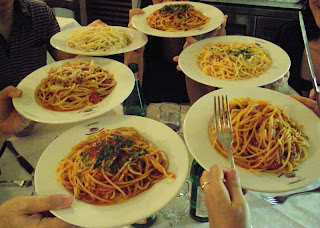 It is a popular restaurant, not only with tourists because of its proximity to the Trevi Fountain but also with locals and sometimes it may take a while before you get served. But we’ve always found the food well worth the wait. 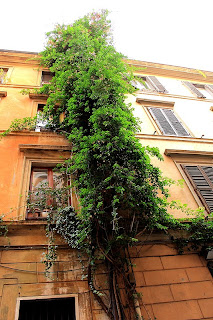 We’ve eaten outside on the street by the restaurant, below a beautiful vine creeping up the wall, and also inside where we had to go down two levels, both filled with tables and customers. And as one goes down those steps, along the wall on the left side is a black and white picture of a very young Sophia Loren.
Ristorante Alfredo 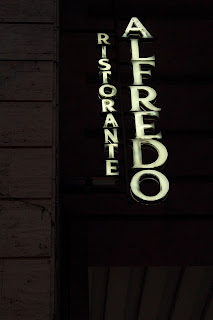 I am including this restaurant in my pasta blog only because this restaurant serves the original fettuccini Alfredo. The dish was invented in 1914 by a restaurateur called Alfredo di Leilo in his restaurant on Via Scroffa which is still there today but is now owned by someone else. According to the story, he invented this dish when his wife was expecting and could not eat anything. It is simply fettuccini with a lot of butter and cheese. The dish became famous when Douglas Fairbanks and Mary Pickford came to eat at the restaurant during their honeymoon. They fell in love with the dish and gave Alfredo a golden spoon in gratitude. Today you see a picture of these two artists on the wall of the restaurant. 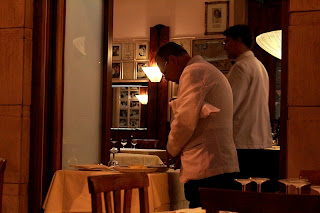 The fettuccini is tossed with the cheese at tableside and the maître‘d makes a show of it. We have eaten here twice and we have ordered one order of fetuccini for three or four of us as our primi piatti to share. It is delicious but way too rich! The first time we ate there with my daughter and my husband, I ordered a steak with truffle oil as my main dish and it was good, the second time however, the steak was overcooked and dry.
Posted by a dependent spouse at 8:37 AM