Yesterday was my husband's birthday and my daughter and daughter-in-law were here to celebrate with us. As per family tradition, he took the day off and we spent the whole day together going around Rome with our two girls. And for dinner, a special dinner (again another family tradition) we decided to go (our third time) to Spirito Di Vino, a restaurant in Trastevere on 31 Via Genovesi. We first heard about this restaurant from an American colleague of my husband's who in turn heard it from an Italian American collegue working in the World Bank. His words were, " If I knew that this was my final day on earth, I would request to have a meal at Spirito Di Vino". We did eat there with McD, my husband's colleague and then again with family just last week. 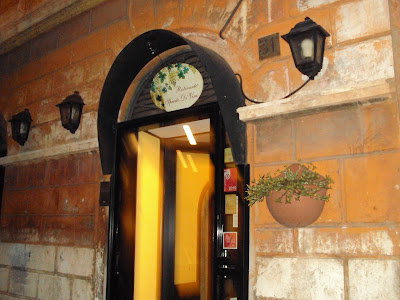 After this introduction, he brings you the menu and explains that his menu changes with the seasons as they only use fresh, range free items. He then goes through each and every item on the menu, explaining ingredients, cooking method and at times tracing the origins of the recipe or dish. 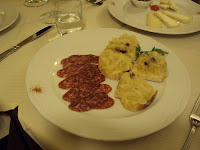 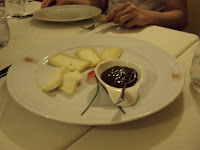 The first time we were at this restaurant, we had taken a rather heavy lunch and decided to pass on the antipasti, which we realized, after we ate there the second time, was a big mistake! As my brother put it succintly "antipasti and desserts to die for!" So as we did the second time we ate there, we decided to go, chinese style, ordering 3 antipastis, 2 primi piattis, 2 secundi piattis and 3 dolces to share among four of us. 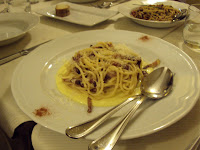 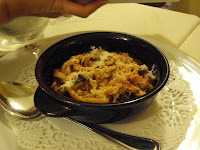 For the antipastis, we had caramelized onions with walnuts on baguette served with thin slices of wild boar sausages, home made cheese with a kind of jam on the side, and a vegetable cake baked in a tureen with eggs. We then shared 2 pasta dishes, the first was sphagetti with chesse fondue and bacon and the second one was sphagetti with a tapenade of tomatoes, olives and anchovies. 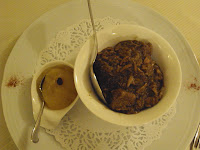 For the main dish we shared a chicken with pepper sauce and the signature dish of the house, pork shoulder stewed in fruits, vegetables and fish sauce which according to our host  was a recipe originally created by Julius Caesar's chef, Gaius Matius. And by the way, the fish sauce or garum as it was called then was made from crushed, innards or entrails of fish fermented in brine. Very similar to some varieties of fish sauce you find around South East Asia today. The antipastis, the pasta and the main dishes were fantastic, the girls were already impressed! But there was more to come! 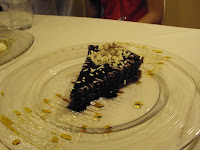 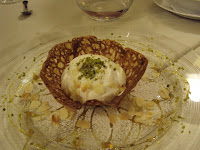 For dessert, we ordered ricotta in an almond brittle basket, capresse almond cake with a dark chocolate sauce and black cherries in an english cream sauce with almond crumble and a home made orange sauce. These were simply delicious!

The nice thing about this restaurant is that the owner is very good at making everyone relax to the extent that you may even begin to  get the feeling that you are eating at a friend's house. He comes around once in a while checking up on you, at times offering wry, humorous comments. This guy is a perfect host! People sitting at nearby tables begin speaking to each other and most have come upon the recommendation of a friend or have read about this restaurant in different guidebooks, some listing this as one of 5 best restaurants in Rome. One of the guests at an adjacent table points to her guidebook and tells our host that he is famous...and he wryly comments, "after what we pay them....I should hope so!" 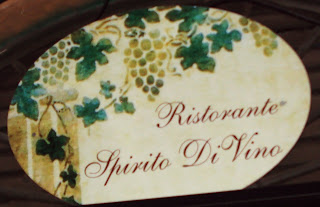 As you can very well see, we loved the food, the ambiance and the whole experience. So at this stage of our stay here in Rome, we have found a restaurant to which we will be returning regularly by ourselves and with our visitors and friends.
Posted by a dependent spouse at 8:17 AM