A Weekend in Paris

In August, Italians leave Rome in droves, escaping the heat and the tourists, most taking a month off before the school holidays end. This exodus includes restaurateurs who board up their restaurants. Came across a number of those signs, one was at Alfredo y Ada where we wanted to bring our girls for a meal. The sign informed everyone they would reopen September 1. Other signs put September 2 or 3 or even September 4 as their reopening day. Feeling a little bit let-down after our visitors from home had all left, my husband and I decided to join this exodus even if for just a weekend. Needing a change of scenery, and a change of climate we decided to go to Paris, not that anyone needs an excuse to go to Paris!
We took an Air France flight from Rome’s Fiumicino to Paris Charles de Gaulle on Friday afternoon. This was the first time I took a flight out from Rome since I got here and as I found out, this was not the time to do this. The airport was packed, the system of checking in was in disarray (saying that politely, tongue-in-cheek), and tempers were short, in effect making the whole process very unpleasant and nerve-wracking.
Arriving in Paris was just as nerve-wracking, again made worse by hordes of people like us trying to “get-away”. We finally got to our hotel in the Montparnasse area exhausted and decided just to have dinner in the area and return to the hotel and sleep. The only thing that was pleasant at this point was the weather. It was so much cooler than Rome at 17 degrees celsius.
The next morning after a good night’s sleep we decided to go to the Notre Dame, a church that to my mind has to be seen every time one visits Paris. We got off the Metro at Cite right on the square fronting the Palais de Justice. And from that moment on, we forgot the inconvenience and hassle of the trip, Paris once again had us enthralled!
﻿

﻿
There is something about Paris that can never be equalled by any other city in the world. She is grand and magnificent and self assuredly displays herself in all her glory with a nonchalance verging on arrogance. And none can resist her! 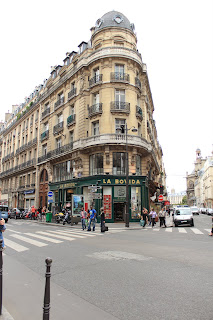 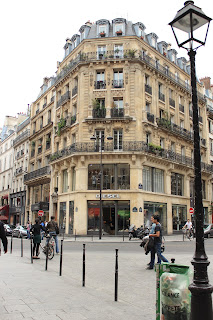 Kudos must be given to the planners of this city. Central plazas are surrounded by streets that radiate out in a star pattern where building facades facing the plaza form the point and then expands to a reclining v shape.  And wide roadways are lined with imposing buildings sporting wrought iron verandas of the most intricate designs. 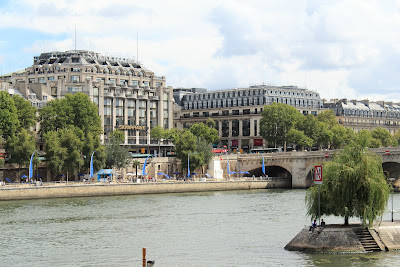 And of course there's the River Seine, transected as it is by multiple bridges and lined on both sides by beautiful tree lined avenues where people can stroll by leisurely. 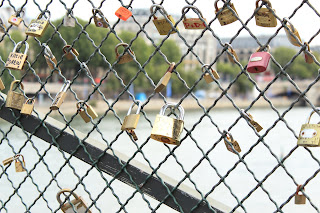 So what did we do in Paris? Not much really, first went inside the Sainte Chapelle, the church of Saint Louis (which I will write about later) and then just strolled along the River Seine, stopping at one of the little book stores to buy some fridge magnets and posters, and crossing one of the many bridges along the river. This bridge was of particular interest as it was reportedly a bridge for lovers, where couples getting married or engaged put a padlock on the bridge with their names.
We were unable to go into Notre Dame on Saturday as the line was too long so we went to the Louvre the next day hoping to get in but of course with it being "free Sunday", there was no way we could do that. So we just found a step to sit on and just sat there contentedly taking everything in.

One thing we were able to do in Paris was eat. That Saturday for lunch we had beef, I had a steak au poivre, my husband had a steak tartare.

And for dinner we decided to have steak again, this time in La Maison d'Aubrac on Rue Marbeuf which a friend recommended. I had a fillet and shared in an order of mashed potatoes and cheese and it was delicious! For lunch the next day we went to Leon's on the Champ's Elysee and we both had mussles with french fries. It was as good as when we first ate there so many years ago, only difference was it is a lot more crowded! 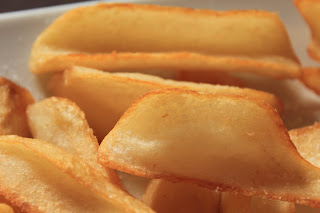 And now for the french fries, what can I say? I ate a lot of them over the weekend cut in different styles and sizes but all of them deliciously addicting, american fries pale in comparison! 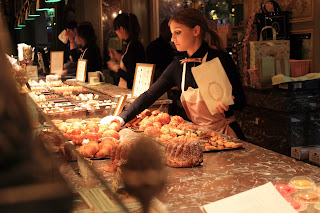 Walking back to the Metro along Champ's Elysee, another item that needed tasting presented itself: macaroons from Laduree!

So we return to Rome, senses satisfied and definitely a few pounds heavier.

Posted by a dependent spouse at 12:09 PM