Iconic Structures of Rome: The Fountain of Trevi

“Three coins in a fountain”.... a song that made many a young girl of my generation visiting Rome, fantasize about meeting someone as romantic as Rossano Brazi and having that perfect Roman holiday! For my mom it was Felinni's La Dolce Vita, with my teenage niece on the other hand, the movie was the Lizzie McGuire Movie with Hilary Duff. So the world moves on, movies and movie stars fade and new ones take their place but the Trevi Fountain remains what it has been, and may be for a long time to come, an iconic symbol of Rome.
Walking along the Via Corso, there are signs that point you to the more visited spots in Rome. One of these, closest to Piazza Venezia is the sign pointing to the Trevi Fountain. Following this sign in the straightest way possible in the twisting, narrow streets of Rome brought us to Via Stamperia where the sounds of water became more and more audible, letting us know that we were indeed approaching the Fountain. Following the sounds, we turned a corner and almost suddenly it’s there right in front of you...the Trevi Fountain! 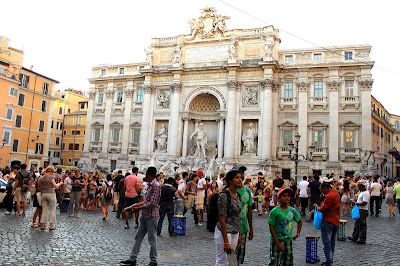 The Piazza della Fontana Trevi is a rather small piazza and the Fountain itself is not in the center of the piazza but is actually built into the back of the Pallazo Polli. Because of its size, the number of people you encounter milling around the piazza can be quite overwhelming!
The Trevi Fountain, the largest baroque fountain in Rome stands at the juncture of 3 waterways, the Aqua Virgine, the Aqua Virgo and one of the repaired ancient aqueducts, hence the name Trevi. The aqua Virgo was constructed by Marcus Vispanius Agrippa, Augustus Caesar's friend and ablest general and also the person who first built a structure on the spot where the Pantheon is today, still carrying his name on it's facade. In the 15th century a simple fountain was erected in this spot to mark the endpoint of the aqueduct as was the practice at the time. In the 17th century Pope Urban VIII asked Gian Lorenzo Bernini to make improvements on the fountain but the project was put on hold due to lack of funds.
Actual work on this fountain only started in 1732 after Nicolo Salvi won a competition held by Pope Clement II to design the fountain. The funds for the building came from the third drawing of the Lotto game (yes the lotto!) in May 1732. It took Salvi almost 30 years to complete the project and he died in the process, his lungs completely damaged because of the time spent in the dank waterworks of the fountain.
The fountain is 85.28 feet hight, 160.72 feet wide and spills 80,000 cubic meters of water a day. The facade is made of travetine blocks (from Tivoli) and the statues are of carrara marble. The main statue is a depiction of Ocean riding a shell chariot pulled by two sea horses. One of the horses is calm, the other, restless, signifying the fluctuating moods of the sea, with the water in the fountain representing the sea.
According to some, the custom of throwing coins in the fountain goes back to an ancient Roman tradition of throwing a coin into fountains, rivers and lakes at the start of a journey to ask the gods to favor the journey and to bring them back safely. However, the more cynical explanation is that someone in the city invented the tradition in order to raise funds for the maintenance of the fountain. Which was a brilliant plan as Wikipedia says around 30,000 euros (some italians don't believe this, saying that a lot of tourists toss in the "little" coin) a day is collected from the fountain! We slowly made our way forward until we managed to squeeze in right to the front of the fountain, where we tossed the obligatory coins with our backs turned to the fountain. They say three coins held in the left hand and tossed over the right shoulder....or was it the other way around? Whichever way, We embraced the legend (after all this was not our first time to do this) and chose to believe that those coins will bring us back to Rome once again. And by the way, we contributed 3 euros to the total collection for the day!
Posted by a dependent spouse at 7:33 AM