My husband has never been very fond of tomatoes, removing tomatoes from his salad, not really enjoying food cooked in tomatoes, and preferring pesto or cream based sauces for his pasta. And like most Chinese, eats only rice or noodles with lunch and dinner, reserving bread for breakfast...maybe. But after over three months in Rome, I find that I am serving more and more baguette or dinner roles with our meals. He has also developed a taste for tomatoes, and all sorts of tomato based dishes. His favourites are tripe and bacalao.

Bacalao:
Bacalao or salted cod is plentiful here in Rome. We first saw this in the market at Termini and we continue to buy our bacalao from this same vendor. Bacalao is sold in slabs that are about ½ - 1 inch thick, 3 – 6 inches wide and about 12 – 18 inches long. The first thing to do before cooking is to wash all the salt off and then soak it in water for 24-48 hours, remembering to change the water at least three times. The time I cooked this for my brother's family, when they came to visit, I forgot to do this and the cooked bacalao turned out quite salty! If it is very hot in your kitchen, you will need to refrigerate while it soaks. Once it’s ready to cook, remove the skin and the bones and cut them against the grain into cubes and dredge them in flour. I like simple recipes and here’s one way to cook bacalao Florentine style. You will need:
3 cloves crushed garlic
1 small onion minced
Pepper
White wine
¾ lb. canned or fresh tomatoes
chilli powder or chilli flakes
﻿
﻿ Saute the garlic and onions and then add the bacalao cubes turning them to cook on the other side as well. Put in the white wine and continue cooking until almost all the wine has evaporated, add the tomatoes, crushing them against the pan, add chilli powder and pepper to taste. And that’s it! This is delicious served with baguette! It is a dish that keeps really well and tastes better the next day. So don't worry about leftovers.... that is if there is any.

Spigola baked in salt:
The first time I tried fish baked in salt was in Sestri Levanti almost 14 years ago during my parents' golden wedding anniversary celebration. It was delicious and not easily forgotten! Then just last month, I had turbot baked in salt at the Casina Veladier, a restaurant atop the Pincio Hill here in Rome. I really liked this and was determined to try doing this at home myself.

My husband loves steamed fish, the way the Chinese do it, which to him is the way fish should be cooked. He believes and I think he is right that this is healthier than frying and brings out the real flavor of the fish. My mother-in-law always steamed her fish and insisted on it's freshness. I remember her pointers: look at the eyes, they need to be clear and luminous, pinch the fish, it has to be firm to the touch and then sniff at it, it should have the smell of the sea! If the fish had a slight smell (a big no no) or was bought in the afternoon, she would say "no good" but would proceed to make a curry or fry the fish with chili so as "not to waste it". So when I decided to try the salt baking way, I knew I had to find the freshest fish possible. 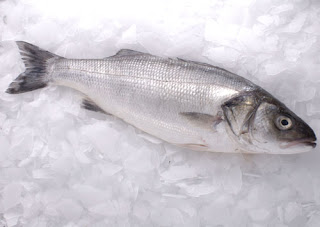 Spigola or sea bass is one of the more popular fish sold in our supermarket. When I first tried this, I went to my friendly supermarket fish monger who advised me not to scale the fish. So he cleaned the inside of the spigola for me and left the scales on. Another time, I had forgotten to tell him that it was for salt baking so he scaled it before I could stop him. Either way it was ok. However, the unscaled fish came out looking nicer. The skin came out in a whole strip, so serving the meat was easier and made me look like an experienced maitre 'd.
﻿
﻿ The salt that I use is of the coarse variety. I use about a kilo mixed with 1 egg and some water until it resembled wet sand, the consistency resembling what one would use to build sand castles on the beach. The subsequent times I did this, I used only the egg white as the yolk gave the salt a yellowish color which was not very attractive.

First time I tried doing this, I was a bit uncertain, but found that it was really simple. First, stuff the cavity of the fish with some parsley and then on a baking dish, spread some of the salt, enough to hold the bottom of the fish securely. Encase the whole fish with the remaining salt and then put it in the oven (350 degrees F) for around 25 - 30 minutes.

﻿
﻿ When you remove this from the oven, the salt cover would have hardened. Using a wooden spoon or the flat side of a cleaver, crack the salt and free the fish. I simply bring the entire fish to the table with some sliced lemon. I skin the fish right at the table. Adding a bit of olive oil and or lemon is all that's needed. Tastes fantastic! Even my husband agreed, so he no longer keeps asking me to steam fish for dinner (I always had to say, we have no steamer or no pan big enough), salt baking has become a very good substitute. And to tell you frankly, I actually prefer this.

After having eaten fish this way a couple of times, I found out that cooking fish this way originated in Sicily. What do I know of Sicily? Well right now as I sit here writing this, I hear the theme song of the Godfather in the background! But this notoriety may only be scratching the surface. Goethe reputedly said, "To have seen Italy and not to have seen Sicily is not to have seen Italy at all, for Sicily is the clue to everything". Need to follow that clue...another side-trip to dream about!
Posted by a dependent spouse at 11:49 PM