I wanted to go into the Notre Dame Cathedral during our weekend in Paris but was unable to. But fortuitously, for no other reason but because we got off the metro at La Cite, we decided to go into the Sainte-Chapelle. You may wonder why I say it was fortuitous? Simply because, the Sainte Chapelle is a jewel of a church! (I don’t say this lightly as I have visited tons of churches here in Rome).
The Sainte-Chapelle was built by Louis IX, canonized by the church and now known as St. Louis, to house the relics of the Holy Passion. He built this on the site of the king’s residence, the Palais de la Cite’ which was began by his grandfather, Philippe Auguste. Sainte-Chapelle was damaged during the revolution but restorations carried out between 1840 and 1868 restored the building to it’s thirteenth century appearance.
In 1239, Louis IX bought from Baudoin II de Courtenay the Franc emperor of the east (after the capture of Constantinople by the Crusaders in 1204), who was in need of money for military purposes, the Crown of Thorns worn by Christ during the Passion for 130,000 livres (a considerable amount in any age). He then deposited the Crown of Thorns in the Chapel of St. Nicholas, close to the Palais de la Cite. Two years later he also bought a fragment of the Cross as well as other relics connected with the Passion. It may have been these purchases that inspired Louis IX to build a reliquary to house these precious relics. Thus the idea of the Sainte-Chapelle reliquary was born.
﻿﻿

﻿The work on this may have began in 1244. The Sainte-Chapelle is a Gothic (i.e. with the towering spires etc.) Palatine (a palace) chapel composed of two stories of identical surface areas but differing heights. The first floor was the palace chapel, open to the king's soldiers, courtiers in residence and servants. The lower chapel is dedicated to the Virgin Mary and you enter it through the Portal of the Virgin. 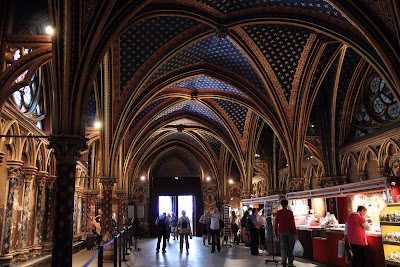 The entrance hardly prepares one for what awaits inside. Stepping in you find yourself surrounded by color, specifically blue, red and gold. The columns are red and gold, the walls are painted a kind of terracota red, and the ceiling is a brilliant blue, studded with three pronged leaves of gold, absolutely stunning! 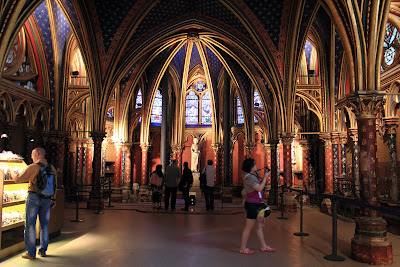 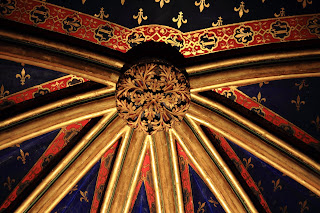 The blue, red and gold paintwork of the ceiling emphasizes the star pattern of the tops of the columns where each tip corresponds with the fall of a rib of the vault. Under the coloumns are statues and in the center of the bays are painted medallions of the apostles brightened by gilded plaster. 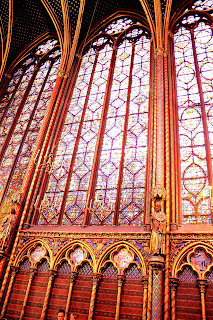 To reach the upper chapel, one needs to climb a very narrow corkscrew staircase. As one needs to watch where one is going, it is at the last step where one can look up, and is confronted by a marvelous sight! The top chapel is amazing in its dimension, its soaring ceiling and the thousand sparkling colored lights coming through the stained glass windows. The lower walls are painted with the same colors as the lower chapel. There are no upper walls, only glass which gives it an ethereal lightness. The ceiling is a replica of the lower chapel. When one looks up at this, surrounded by light, one gets the impression that one is looking up at the sky. It is truly awe-inspiring! 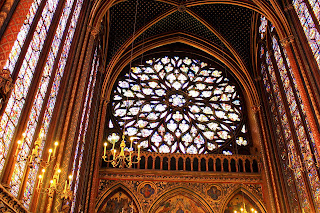 The stained glass windows depict different Christian themes. The one right behind the main altar for example depicts scenes from the Passion, the first one on the left closest to the entrance depicts the story of the Relics of the Passion stored here in the past. And the Rose window depicts the Apocalypse. 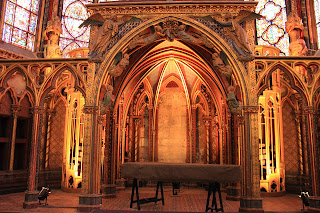 In the center, one sees the main altar and on top of the altar is the relics platform, no longer containing the relics for which it was intended. The Sainte-Chapelle was built for worshipping by someone who was familiar with man`s need for this, and who also knew how best to encourage, or awaken this need. As I sat there in the top chapel, people around me were seated quietly, some contemplating the guides identifying the stained glass window, others just sitting there, as awed as I was.
Posted by a dependent spouse at 11:22 AM