A Dose of the Macabre

Waking up on a saturday morning is never easy, it is singularly more difficult in this Italian apartment, with shutters that completely close, not allowing even the minutest of light slivers through. In addition, the weather is beautiful, warm during the day, getting cooler as the sun drops and decidedly chilly at night and early mornings, very conducive for sleeping in! And when you've finally gotten yourself up, another challenge is getting the hubby, who has had a hard week at work, interested in traipsing around Rome with you.

My plan for this Saturday was foolproof, promising to have lunch with him at this chinese restaurant in Termini, after we took a look at "something different".

"Lunch?" "Chinese?" "Sure!" Whoever said, "the way to get a man to do something is to feed him", must have been a woman!

Our destination was the Church of Sta. Maria della Concellazione, along Via Veneto, very close to Piazza Berberini, more specifically the Capuchin Crypt attached to it. The Capuchin Crypt is an ossuary or a bone house, containing the remains of 4,000 monks. First time I came across the term ossuary was in John Connelly's book, "The Black Angel". A good read, but definitely verging on the occult. And in typical John Connelly fashion, his description of the ossuary was vividly macabre! So it was with some misgivings that I walked into the crypt.

At the entrance, you are required to give a donation and told to put your cameras and cell phones away, "No photos please to show respect for the dead". (The pictures you will see below are from postcards, which by the way are for sale right there,  leading me to conclude that commerce trumps all. ) Then you step into a rather dark, poorly lighted corridor, the left side of which are six small chapels, where the bones of these monks are set into the walls in abstract or Christian patterns. 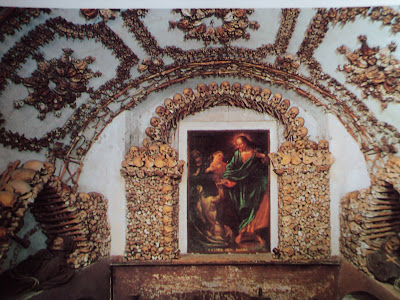 Some bones and skulls are simply piled up to form arches under which fully clothed skeletons in capuchin robes are positioned in various poses. 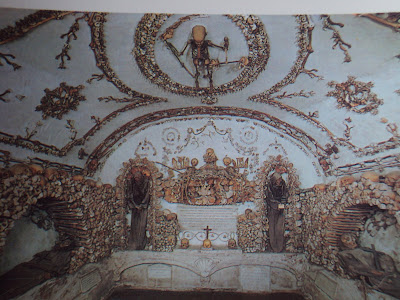 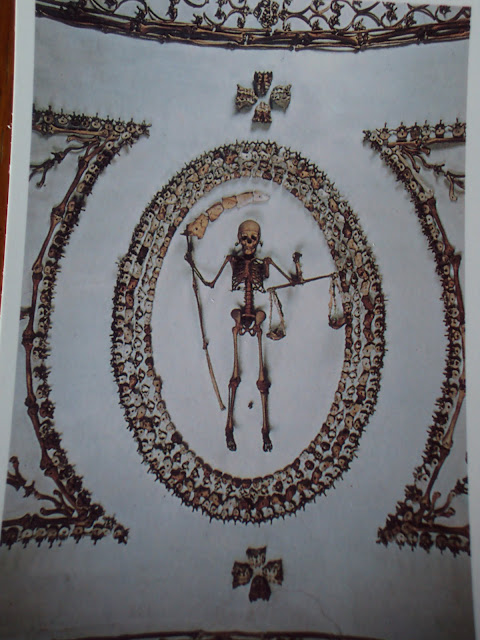 ,
Creepy indeed!
The corridor ends and you have to turn back to leave the way you came in. We then proceeded to the Church, the simplicity of which differentiates it markedly from the other ornate baroque styled churches we had seen previously. 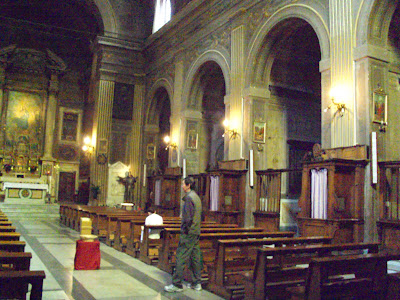 This simplicity and the silence of the surroundings is very conducive to contemplation and reflection, something that comes unbidden after viewing what was disturbing, yet fascinating.
This  contemplation of death, as seen in the crypt, is  a common theme in numerous paintings, and sculptures in churches  and museums around Rome.

﻿
﻿
Definitely macabre but  serving it's purpose, to teach the truth that all men must die and should therefore prepare themselves for this eventuality. 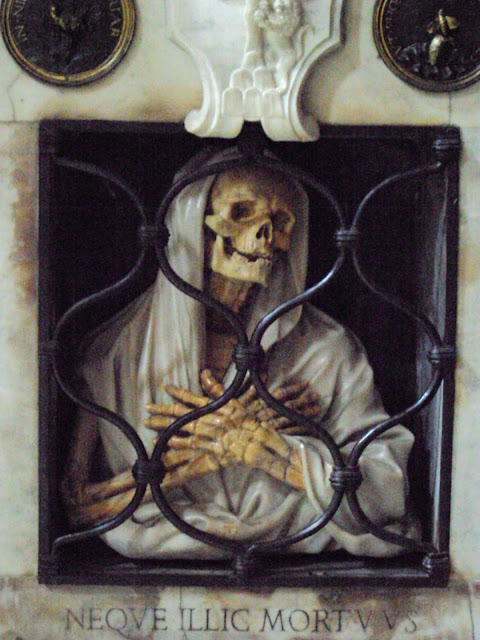 As we prepared to leave the Church, I took out my little travel notebook, where I jot down things I want to remember and read again what was written in five languages at the crypt exit  "What you are now we used to be; what we are now you will be!"

Posted by a dependent spouse at 2:29 AM