My three sisters and I took a mosaic making course in the City of Ravenna, a UNESCO designated World Heritage Site, primarily because of it's unique collection of early Christian mosaics and monuments.

From being the seat of the Western Roman Empire in the 5th century, Ravenna became a Gothic Kingdom when conqured by the Ostrogoths, who were in turn driven out by Justinian I, who made Ravenna the seat of the Byzantine Empire in Italy. At this time Europe was in the midst of what came to be called it's Dark Ages, Ravenna however was at the pinnacle of it's influence and power.  It was at this time that most of the churches and monuments designated as Unesco Heritage sites were built.
﻿

Ravenna is called the City of Mosaics for good reason, becoming the center of mosaic making in the 6th century when it became the seat of the Byzantine Empire. Today, it's greatest attraction is its collection of mosaic masterpieces found in its churches and mausoleums. Because of her ties with the Byzantine Empire, Ravenna is believed to have the finest Byzantine mosaics outside of Istanbul.
﻿﻿﻿

Most of the early churches like the Basilica of San Vitale are covered with brilliant, glittering mosaics, the intervening centuries seeming not to have changed them in any way. 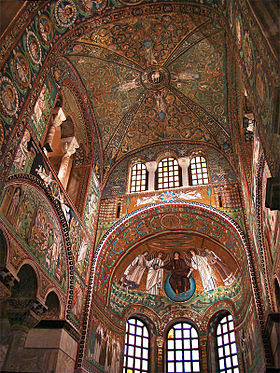 The Mausoleum of Galla Placida is a rather plain brick structure with small windows on the outside. Therefore, one is unprepared for what is inside. 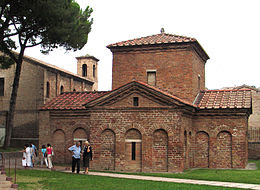 When I walked in, my eyes needed to adjust to the rather dim interior due to the fact that the small openings were covered in alabaster (a type of fine grained, translucent white mineral which are usually made into vases, statues etc). But once adjusted, my eyes were immediately drawn upward to a starry night sky, a lovely mosaic on the vault of the mausoleum! Beautiful! And then the assault on the senses, from all sides, figures, stars, flowers, geometric designs and color, and more color, it was an awe-inspiring sight!

﻿﻿
Alongside these ancient structures and monuments, one can also see the tomb of Dante Alighieri, author of the Divine Comedy and one of Italy's supreme poets. He died in Ravenna in 1321, having been exiled from Florence. His remains were never returned to Florence, the Ravenans refused to give him up, saying that Florence "did not welcome him in life, so she did not deserve him in death."

Ravenna's city center is compact and is generally car free. Free use of bicycles parked around the city makes it a popular mode of transportation for those who can navigate cobbled stone streets. We preferred to walk. Signs are prominently displayed so it is not difficult to find your way. 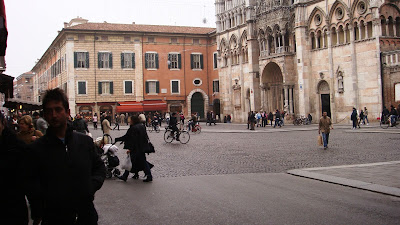 Because there was an evening mass, just as our mosaic classes ended, we would attend mass which would finish just as the restaurants opened their doors for dinner. The number of people attending mass could be counted on 1 hand (excluding us the 4 sisters). The masses were said in a small side chapel. Sunday mass was not much better attended, and most of them were middle-aged or elderly. And to think we were in Italy!
Entry into the older part of the city was through an archway. 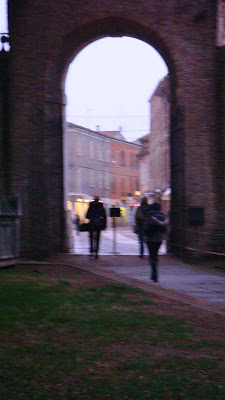 The side streets are narrow, the buildings painted in different hues of beige and terra cota. 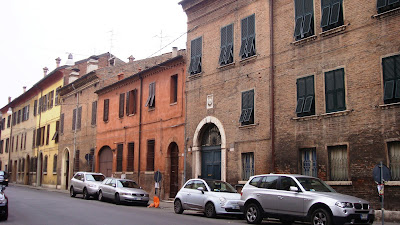 The shops are small, mostly specialty shops, gellaterias (ice cream), macellerias (butcher), panetteria (bakery), enoteca (wine) and the ever present tabacchi (tobacco store, Italians are still heavy smokers). There are also souvenir shops and not to be missed, the colorful mosaic supply store selling smalti, millefiore, tiles and whatever else one needs to make a mosaic. 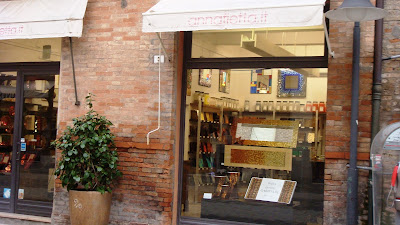 Ravenna's charm also captivates with simple but unforgettable sites like these cattails guarding an entrance to an apartment complex. 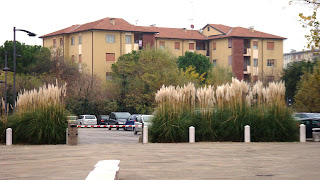 ﻿
And this bush found in the courtyard of a basilica. 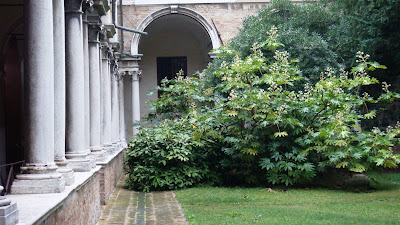 And as a reminder of it's glorious mosaic making history, modern mosaics with a sense of humor!
﻿
And in the park, a three dimensional mosaic of a bench with a forgotten coat. This one was done by Lucianno Noturnni, a world renowned mosaicist, whose school we attended. 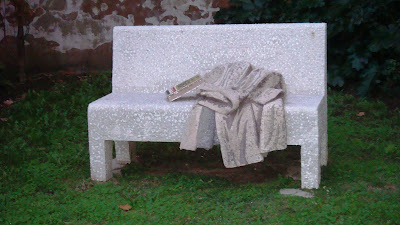 Now, about the food! What can I say? I love Italian food for so many reasons, but most of all, I think because of it's simplicity, no heavy sauces, just enough to enhance the pasta or the meat. My Siennese friend says Italian cooking evolved mainly from peasant food, using fresh, limited ingredients. Cheese, ham and wine are mainstays in my friends kitchen and his pasta, well he buys it from a local store in Sienna, no packaged pasta for him and all Italians (so he says!)
We ate in many family owned restaurants when we were in Ravenna, but on the last day we decided to eat at a highly recommended restaurant Ca' de Ven. Ambiance was fantastic, wine was excellent. Food, well most of what we ate while in Ravenna could compare.
﻿﻿