Our visit to Siena coincided with our Italian friend and colleague receiving an award for his contributions in the field of vaccine research, Siena being home to Novartis, a multinational firm engaged in vaccine research, development and production. Called the Sta. Caterina awards, an awarding ceremony, honoring outstanding Sienese citizens in various fields was held in the opera house. My husband and I attended this ceremony, conducted in Italian, which of course we could not follow, but we clapped when everyone did, and just took our cue from what the other members of the audience did. However,  I recognized the name of one of the awardees, Virna Lisi, an Italian actress who enjoyed some success in the 60s, and when she came up on stage, I marveled at how great she looked for one who would be in her late 70s?

In the midst of our friend's acceptance speech, we heard him say our names and then pointed to us in the audience. He was giving thanks to my husband as his boss and colleague, who gave him the opportunity to pursue his research. (At least that was what we were told he said.)
The day before the awarding ceremony, our friend brought us down to Siena to have "a look around". We dropped off his car at the bottom of the hill and took an escalator to the top of the hill right to the heart of Siena, a UNESCO world heritage site. Walking into the center of Siena is like stepping back in time to the middle ages.
The Piaza del Campo or town square is shaped like a giant shell, sloping down from its circumference to a point where there is a large drain, in effect, our friend says preventing floding in the area. Here the Palio horse race is run twice yearly, a race that has taken place continuously since the middle ages. 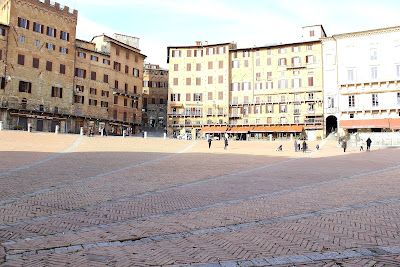 As our friend tells it, life in Siena as it had been since the middle ages centers around wards or contrade. These contrade had their beginnings as battallions formed for the city's defense. Each contrada has an animal as its mascot and one sees pictures, statues and wall engravings of these in each contrada.
Where one is born determines what contrada he belongs to. In our friend's case, his son was born in the Aquila (Eagle) contrada, and his daughter, who was born in a taxi on the way to the hospital belongs to the Bruco (caterpillar) contrada. The tradition is so ingrained that some babies are not only baptized in the church but are also baptized in the fountains of their contrada!
Rivalry among contrade reaches its peak during the Palio, where 10 of 17 contrade (the rest have their turn in the next palio, which is held twice a year) field entries. The contrade select a horse (all of mixed breed) which they take care of prior to the palio and it is riden by a member of the contrada. The winner is awarded a hand painted banner of the Virgin Mary.

From the town center we entered the museum where we did not linger, our friend being more interested in showing us the view from the rooftop. But as we did a quick round of the museum, I did remark on how small it was and how limited the works of art on view were. I was to get educated as to the cause of this a little later that day. 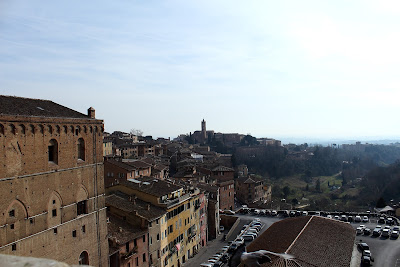 From here we also saw the church of San Demenico. 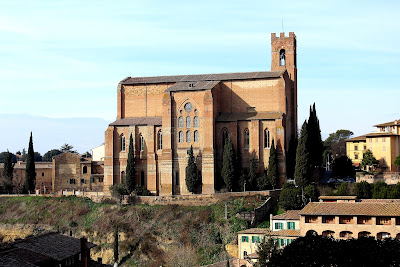 Our friend, being a researcher and academician then brought us into the University of Siena, a very ancient university retaining much of its vigor and glory. When you walk through these corridors and courtyards, the meaning of "hollowed halls" becomes understandable in a subliminal way. 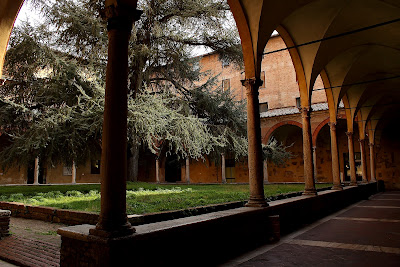 
We then proceeded to the Cathedral or Duomo of Siena on foot, there being no better way to negotiate some very narrow, meandering streets..... 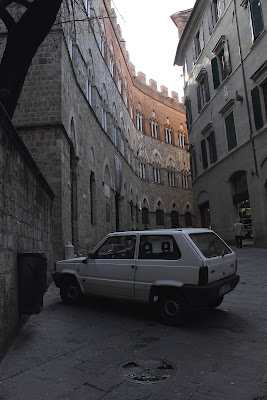 finding oneself suddenly walking under arches.... 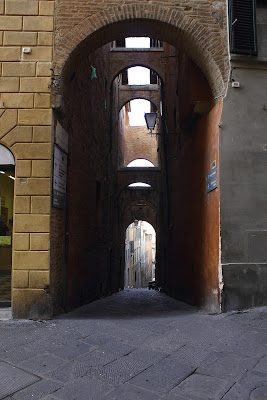 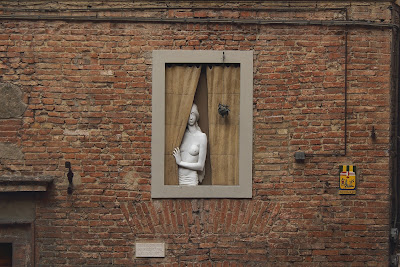 Turning a corner, one sees the Duomo... 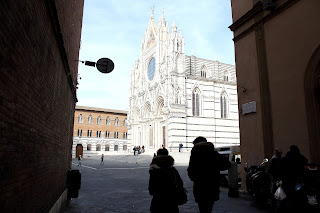 The Duomo is a gleaming example of Gothic architecture with its soaring pointed arches, a medieval architectural innovation, giving the structure a more vertical, visual character. The Duomo was built in the early 13th century. In the 14th century, with Siena experiencing unprecedented wealth and influence, expansion of the Duomo, which was envisioned to surpass even St. Peter's Cathedral in Rome was began. But in 1348, the Black Death swept through Tuscany, killing 4/5 of Siena's population. Siena never recovered, her cathedral was never completed and her economy never reached its past glory. Siena suffered the most from the Black Death and as a consequence lost out to Florence economically and culturally. My friend then said sadly, "that's why they have the Uffizi, and we have what you saw". 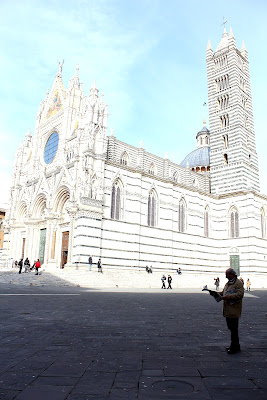 After this poignant revelation we sat on the steps of the west entrance of the cathedral and took a brief respite from all the walking and then left the area via a steep staircase from which one could see the the fascade of the unfinished Duomo Nuovo, the 14th centruy expansion. 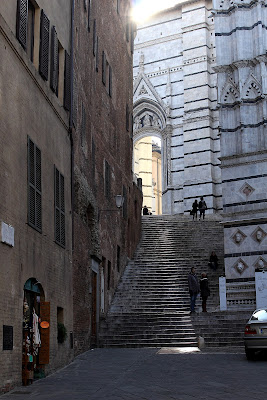 By this time it was late in the afternoon, and needing some refreshment, and not only for the body mind you, we went into a wine bar (wine bottles from floor to ceiling, most of them in racks carved out of the stone walls of the establishment. Hams, salamis, cheese and several bottles of Brunello del Montelcino revived us body and soul!
Posted by a dependent spouse at 11:32 PM