A Dose of Home: Mama's Table

I have to apologize for not posting anything on this site for awhile now. I am not in Rome at the moment. This hiatus though unplanned was unavoidable. After 33 years, 8 major moves, and 2 sabbaticals, retirement looms in the near horizon. In preparation for this, I came home to make arrangements to complete our retirement home. While here and in the midst of pondering what this next stage in our lives will bring us, I was invited by my aunt to visit her at her place up in Baguio City, the capital of the mountainous province of Benguet. The last time I was here was over 10 years ago.
The drive from Manila took a little over 5 hours. The first part of the journey was on wide highways built by Japanese expertise which bypassed the busy town centers of the provinces of Bulacan, Pampanga, and Tarlac. When the highway ended, the going became slower; the provincial roads brought us right through the centers of towns in Dagupan Pangasinan and La Union. After La Union, we started to climb the mountains, zigzag roads getting steeper, hairpin turns coming one after the other and finally we reached the top and entered the city of Baguio.
To say that I was disappointed would be an understatement. The Baguio of my childhood was full of pine trees, wide open views of the mountains near and far, fresh chilly air redolent with the fragrance of pine. This Baguio was lined with houses, houses and more houses. The smell of pine was overpowered by gasoline fumes exuded by the numerous vehicles stuck in traffic! We finally turned onto a road leading to the Baguio Country Club and here finally the pine trees began to emerge.

﻿
﻿My aunt’s place is right out of the pages of my childhood memories of Baguio. It sits right on top of the mountains with magnificent views, constantly flowing breeze, and so high up that one can almost reach up and touch the sky (another childhood notion of mine). The house, built by my uncle is literally a glass house, giving one a 180 degree view of the surrounding mountains, a truly awesome sight! 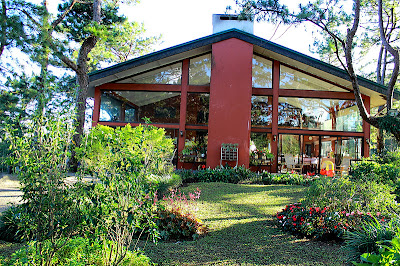 In this lovely environment, my cousin, Chef Vicky Tinio Clemente operates a one of a kind dining establishment called Mama’s Table. A reservation only place, minimum party of six and no menu because Chef Vicky will cook what she finds in the market on the day of your reservation. She doesn’t advertise, people come to her table upon the recommendation of friends and many of them return themselves. The day we arrived she was in the midst of serving lunch to a party of 10. Judging from the conversation, the laughter and clink of silverware, they were having a wonderful time!

﻿
﻿ We were served lunch, not the gourmet lunch with the appetizers and main dishes and desserts of the other table but delicious filipino food, pesa (chicken soup with vegetables), sayote top (leaves and stems of the chayote) salad, beefsteak filipino style and fragrant steamed rice, food that made my long absent filipino soul sing! There is a saying in filipino "nagpapataba ng puso" which literally translated is "making the heart fat" and that is how I felt after eating in this wonderful place, stomach filled and emotionally satisfied!
On our way down, we took the longer route through the Marcos highway which brought us through many of the towns in Benguet, where the mountains are still forested with the trademark pines of the mountain province. Intermittently we would pass little storefronts along the highway selling bananas, mangoes, brooms, wooden furniture, wooden carvings and so much more.

Past and present merged in this side trip to Baguio. Coming back home and rediscovering the joys of childhood and encountering the frustrations of living in a developing, albeit struggling country is beginning to beckon like an adventure to be lived and enjoyed! In the meantime, it's back to beautiful Rome and living a daily dose of Rome for a little while longer!

Posted by a dependent spouse at 2:02 AM