Iconic Structures of Rome: The Pantheon

I have visited the Pantheon three times since I arrived in Rome and I know I will be visiting it again and again before I leave. Some consider the Pantheon the preeminent architectural feat of ancient Rome, and I can understand why! I approached the Pantheon from the via di Minerva, seeing GianLorenzo Bernini's statue of a playful baby elephant affectionately known as "little Chick", seeing the Pantheon from it's side and then walked around to the front. 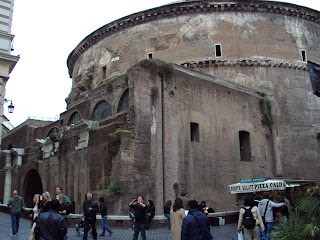 It was completed sometime in 125 AD under the Emperor Hadrian and was built atop an older structure (27BC) by Marcus Agrippa, Augustus Caesar’s son-in-law and military commander. Hadrian honoured Agrippa by placing this inscription on the frieze of the portico – M*AGRIPPA*L*F*COS*TERTIUM*FECIT. 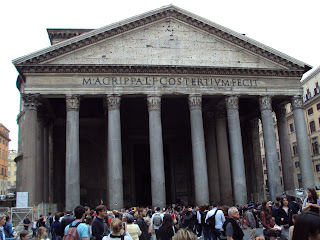 The Pantheon was a temple honouring the 12 most important classical gods of Rome: Jupiter, Juno, Neptune, Bacchus, Apollo, Diana, Mercury, Minerva, Mars, Venus, Vulcan and Ceres. In 609 AD, the Pantheon was consecrated as a catholic church, Sta. Maria ai Martiri, which may have helped preserve it. That did not prevent Pope Urban VIII, a thousand years later, from stripping the bronze roof from the ceiling of the portico and melting it down for the baldachino at St. Peter’s and the cannons of the Castel Sant’Angelo. 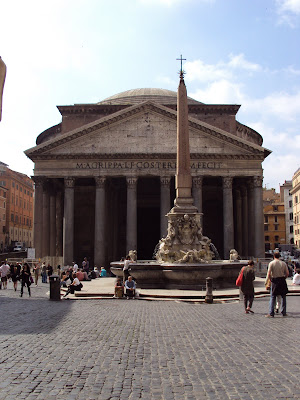 The Pantheon was built on the Campus Martius or the ancient Field of Mars. Today the Pantheon is on the southern edge of the Piazza della Rotonda, considered by some to be one of Rome’s more picturesque squares with the pre-requisite fountain in the middle and yet another obelisk. The Piazza is always crowded, with people sitting in the cafes, hawkers pushing their wares, street musicians performing cacophonously, faux centurions offering themselves to be photographed, boxed in by buildings, and littered with debris, giving it an air of lively decrepitude, but somehow not detracting from the magnificence of the Pantheon. 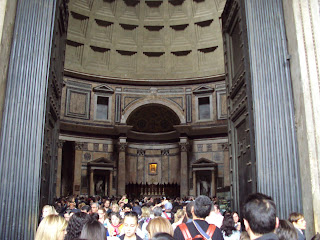 Walking into and seeing the Pantheon that first time that first week in Rome literally blew my mind! The simplicity of the structure, the wide open circular space, the dome with the oculus through which the sun’s light came through was just breath-taking, an uplifting, maybe even religious experience! The hordes of people did not detract from the experience but did fuel a resolve to come at some other time, numerous times if need be to experience this place under more peaceful circumstances. 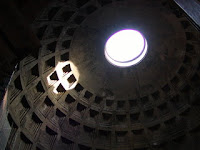 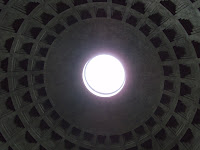 Sitting down underneath the oculus, I remember the information: the height and diameter of the dome are an identical 43 meters, creating a perfect sphere, apparently a symbol of spiritual perfection. The dome is also thinner on the top and has an occulus to enable the base to support it's weight. The occulus is 9 meters in diameter allowing the sunlight in, through which you also see the sky. The occulus and the doors are the only sources of natural light and the  light through the occulus moves in a reverse sundial effect. Looking up at the occulus can be mesmerizing, be careful though lest you leave the Pantheon with a stiff neck! ﻿
﻿ ﻿The interior design is dominated by squares and circles. The floor has a checkerboard pattern, while the ceiling is adorned with concentric circles of squares. Directly underneath the dome are niches which at one time may have contained the statues of gods. 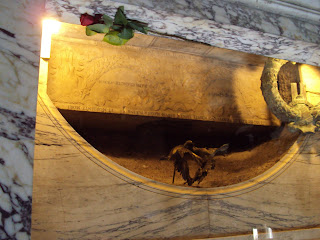 Then one sees the columns, the high altar and the apses. In addition there are three niches and three chapels. King Victor Emmanuel II is buried in the second chapel and Raphael, the painter is buried in the third niche near the third chapel. 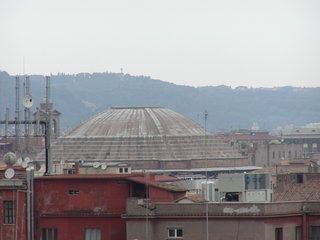 Reading accounts of travellers to Rome modern and from long ago, it becomes apparent that the sight of the Pantheon has been and will continue to be an awe-inspiring sight! And as if to underline it's uniqueness, even in this city of mind-blowing sights, it can be seen easily in any panoramic view of the city, resembling an upside down chinese bowl, unique in this city of domes. 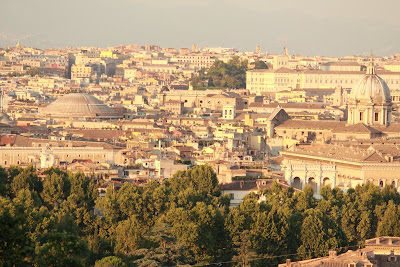 Posted by a dependent spouse at 7:50 AM