It started with rain, lots of it! The whole of Thursday it fell, but undeterred, my husband and I went shopping. I don’t like rain but SALDI (sale) signs are hard to ignore, Via Corso, Via Ottaviano, Via dei Condotti (no sales here...as if to say if you can’t afford our prizes....) and all the side streets in between. So we braved the weather, came home slightly damp but happy with all the bargains we brought home with us.
On Friday, schools were called off and wet snow fell the whole day. Going out on the streets was perilous, as Romans, especially Roman drivers, are not used to snow of these amounts. My husband and I were undeterred having lived in Montreal for the better part of 4 years, where temperatures of -16 C was taken in stride and 6 inches of snow was hardly noticed.
Getting to the city was no problem, trains and buses were running but the Colosseo was closed and so was the Forum, something that had not happened in maybe over 20 years. 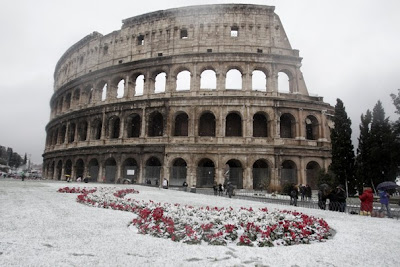 And today, Saturday, we woke up to the sight of snow covered streets and trees even in our neighbourhood. We woke up late morning which rarely happens, this because of the unusual silence since only buses were on the road, our neighbours deciding to stay in, at least until maybe lunch? 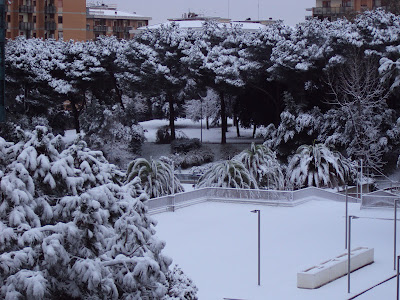 An addendum: A curious thing we have come to get used to here is the absence of a clothes dryer. Most of the apartments in our area dry their clothes out in the veranda, which we have been doing since we got here. But with the onset of winter, drying can take three days, two outside and a whole day beside the heater. But last Thursday I washed some clothes and put them out to dry. Forgot about this and remembered it only this morning. So we have to contend with another unforgetable memory of Rome.... frozen underwear!
Posted by a dependent spouse at 12:41 AM

Email ThisBlogThis!Share to TwitterShare to FacebookShare to Pinterest
Labels: Rome snowed under