By the Shadow of the Pyramid

There are very few places in Rome where you won't encounter hordes of tourists, frantic to take in everything they can before they need to leave. Can't blame them, there's just too much to see. However, with summer's  approach, these beautiful, cloudless days are accompanied by the brilliance and intense heat of that Roman sun. Battling the heat and the crowds, can try even the most intrepid of tourists.


Finding a quiet, cool place away from the crowds is therefore delightful. I found just that near the Piramide Metro Station (Metro Line B) as I was on my way home from walking the Aventine Hill. The place cannot be missed, first of all because of the landmark right beside it, the pyramid of Caio Cestio, a massive structure at the edge of Via Ostiense, and also because from the top of the walls, (not just any wall though, it's the Aurelian wall, started by Aurelian in 271 BC and completed by Probus in 280 BC) one sees trees, lots of trees! For someone trudging along under a very hot sun, it looks inviting indeed!

﻿
﻿ This unlikely place to de-stress is the Protestant Cemetery, a misnomer really as this cemetery is reserved for all non-Roman Catholics of all nationalities and religions.

﻿﻿
﻿
﻿ ﻿﻿ It's rather poetic, this juxtaposition of the Protestant Cemetery containing modern tombs and the pyramid, the tomb of Caio Cestio, a minor Roman bureaucrat who died in 12 BC. Stepping inside, after dropping a donation in the box at the gate, one immediately feels a tranquility, a serenity. The pyramid, and the  tall cypress and other evergreens cast their shadows on  neat gravestones. 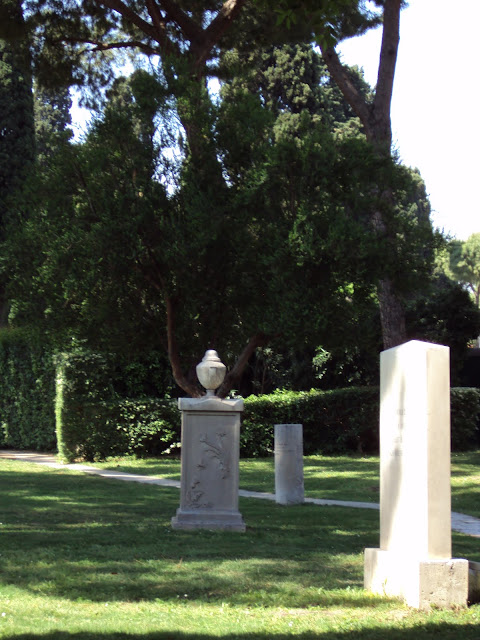 Bushes with fragrant white flowers, which to me looked and smelled like jasmin are scattered here and there. Vines creep up the aurelian wall at the rear of the cemetery. And there is silence, a peaceful, blessed silence, broken once in a while by the tweeting of birds, the footsteps of visitors and the laughter of children, playing in an open area near the older part of the cemetery.

﻿﻿﻿
﻿﻿﻿ The lay-out invites one to meander and strategically placed benches encourages one to sit and linger. 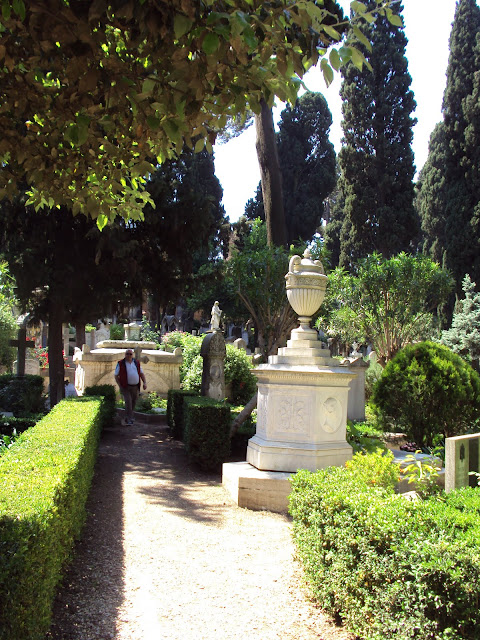 The first grave I came upon was Shelley's. He died in a boating accident off the coast of Viareggio in 1822. It is in the newer area of the cemetery almost against the wall. He is buried beside Edward Trewlaney, who proclaims their friendship in his gravestone. 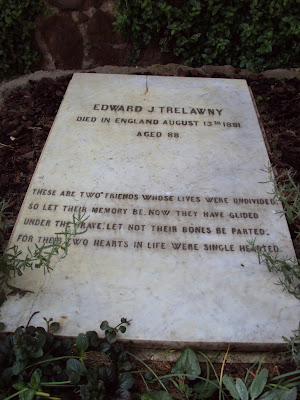 Keat's grave is in the older section of the cemetery, tucked in the leftmost corner. His grave and that of his friend, Joseph Severn and Severn's son are arranged together in a plot planted with flowers and shaded by a tree. There is also a bench against the wall, facing the grave, inviting one to sit and contemplate. It is in the quietest part of the cemetery and very peaceful and beautiful.
﻿

If you do allow yourself to sit down, you are forced to reflect on the words on Keat's gravestone: 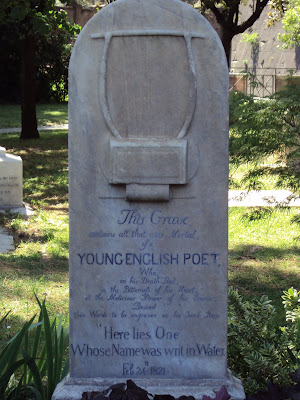 "Here Lies One
Whose Name was writ in Water"﻿

Leaving one with a feeling of nostalgia and an unescapable sadness, a sense of loss..... maybe, for one so gifted to die so young! Oscar Wilde visited this place and Keats' grave in 1877 and he was moved to write a sonnet on Keats, parts of it read:


It is such a peaceful place that there is a reluctance to leave. And so I sat, lulled by the breeze and the silence, dozing off a little, to be rudely awakened by a rustle of wings, and the cawing of a black crow settling on the arm of the bench I occupied. He stared straight at me, I stared back and then I realized that it was darker, there were no more people around. I stood up abruptly, thinking to myself, "Shades of Edgar Alan Poe"!
And so I left, but not before giving another donation meant for the "other" inhabitants of the cemetery. 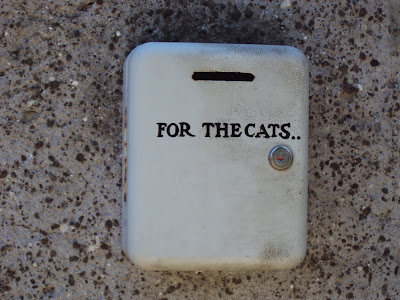 Posted by a dependent spouse at 5:25 AM