I love Italian food...and nothing beats eating italian food in Italy, right? Well.......maybe eating french food in France? Hmm...that's something I need to think about. But that's for another time. Right now let's talk about food....Italian food, specifically eating italian food in italian restaurants in Rome!
There are things one needs to know about eating out in Italy. The most important being that meals are served and eaten leisurely. For Italians, meals are not only about consumption, it is more of a social event, when with friends or a family event, when with family. As such time is set aside, forgotten. So when you sit at a table in the restaurant, a waiter comes along and brings you a menu and then you're given time (a lot of time, for one used to fast food service) to look at the menu, then you order and your drinks are brought and then you wait..... and so on. When you're done, 2 hours could have gone by.
The next thing to be aware of is that italians eat late, lunch is usually between 1 and 3 or 4 in the afternoon and dinner may start at around 8 or 8:30 and go on until 11 or later. Most restaurants open at 12:30pm to 1:00pm for lunch and 7:30pm to 8:00pm for dinner.
A note of caution, when you receive an invitation for dinner or are going out for dinner, have a really light lunch, because there are four parts to a typical Italian meal:
The first is the antipasti which is made up of hot or cold appetizers, like melon wrapped with prosciutto, beef carpaccio, olives, parma ham with figs, marinated vegetables and many more delicious items like these.
This is followed by the primi piatti which most often will be a pasta with a sauce, or a risotto, sometimes gnocchi (dumpling), or polenta or maybe even soup.
The secondo piatti is the main course, either meat, fish or seafood. Side dishes of potatoes or a salad or some other vegetable can be ordered or are served with this course.
Then, the not to be missed part, the dolce or dessert, which can be a fruit, cheese, ice cream, and countless sweet concoctions. This is followed by coffee and then a digestivi, a liquor which as the name suggests, supposedly aids digestion.
The meal is accompanied by wine and lots of it. ( I am amazed by how relatively inexpensive wine is here!) You are of course free to skip the antipasti and the primi piatti and go straight to the main course, but you would be missing what may at times be the better part of the meal.
What we have tried doing here is to eat the "chinese way", which essentially means "sharing" a dish. On one occasion, there were four of us, so we had three orders of each course. The waiters kindly provided extra plates and utensils which made the sharing easier.
We have eaten in a lot of restaurants since we've arrived. Many of them memorable, some others, mainly tourist traps. Here are some of the more memorable ones, with a recollection of our experiences and reactions while eating there.
The Casina Valadier on the Pincio Hill
We were invited by an Italian friend from Sienna to eat at this restaurant. We took Metro Line A from Termini, and got off at the Flaminio stop right at Piazza del Popolo. We had a drink at Rosati, a bar on the Piazza, and then walked up a long flight of steps to the Pincio terrace which afforded us a fantastic view of Rome, including St. Peter's Basilica.


The Casina Veladier is a very upscale place, very close to the Pincio Terrace and is considered a watering hole by politicians, rock stars and the rich and powerful, or so we were told.


The service was definitely impeccable. Thinly sliced zucchini stuffed with ricotta and zucchini blossoms stuffed with tomatoes was my antipasti. Decided to skip the primi piatti and and went directly to the main course, turbot baked in salt and served with spinach (this was very good!). Dessert was a chocolate dome with coffee mousse and a vanila bean at the center. We had a Montepulciano L'Abruzzo with the meal and finished it off with an espresso. Overall a good meal but rather expensive. What was most memorable was the view from the restaurant.


Would we go back to this restaurant? Yes.....if only for the view.


On the other end of the restaurant scale is a very charming mom and pop operation. At this place there is no menu, you simply eat what they have for the day and their house wine is literally made in-house. Cooking responsibilities have been passed from Ada to her grandaughter, a very attractive, young lady.
First time we ate there was for dinner. It's a small restaurant on Via Banchi Nuovo, a small road adjoining the Via B. S. Spirito which is directly connected to the Ponte Sant' Angelo, the bridge leading straight to the Castel Sant' Angelo.
Our waiter, a rotund man with a ponytail and a sense of humor (his response to our statement that we didn't speak Italian: "Me too I speak Roman"), comes around to the table and asks, "red or white?" My husband responds, "Huh?" "Wine, what wine?" "Ah!", my husband enlightened answers, "Red". "Cream sauce or tomato sauce?" My reply, "ah?" "What sauce do you want for your pasta?", he clarifies. And so it went on.

My very reasonably priced meal was spaghetti with a spicy tomato sauce, followed by veal scallopini (choice of veal or beef) and finished with some italian biscuits for dessert. This was accompanied by a carafe of red wine dispensed from a cask on a niche in the wall.

Since then, we have gone back for lunch and we'll be bringing our girls there when they come to visit.

This restaurant is located in the Jewish quarter, on Via del Portico D'Otavio, which ends at the ruins of Teatro di Marcello. One sees the ruins of the Portico d'Ottavia, a gate built by Augustus to honor his sister, Ottavia, whom he married to Mark Anthony in hopes of cementing an alliance between them after Julius Caesar was assasinated. And of course we all know what happened after, Mark Anthony left her in Rome and joined Cleopatra in Egypt. 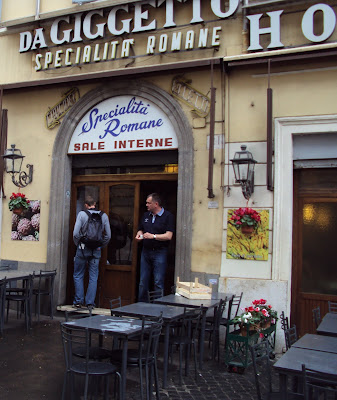 Giggetto's menu focuses on traditional Roman dishes. It's signature dish is fried artichokes (carciofi alla guida). On the day we ate there, they had fried filet of cod (filetti di baccala), carciofi della guida and fried zucchini flower as antipaste. We ordered one of each.

The zucchini flower was stuffed with ricotta cheese and anchovies. It was delicious and so was the cod. I love artichokes and was very excited to try the fried carciofi. But I was dissapointed, to me it was like eating dried leaves. I prefer boiled artichokes, where you scrape the bottom of each petal with your teeth and work towards the heart.

For our main dish, we ordered 2 other "specialities of the house", fried lamb's brain and osso buco.


The osso bucco was very good, as for the lamb's brain.. ...? So would I return to this restaurant? For the baccala and the zucchini flowers? Definitely!


Posted by a dependent spouse at 1:43 PM